The Assistant Inspector
General (AIG) in-charge of Maritime Command, Kalafixe  Adeyemi has assured of adequate security of the waterways before, during and after the forthcoming general elections.
Adeyemi  gave the assurance during a familiarisation tour of Ports Authority Police, Eastern Ports Command in Port Harcourt, Rivers State on Monday.
According to her, the police would continue to proffer solution in containing violence and crisis during the elections as it is also putting in place all logistics in ensuring that the waterways are safer and protected during the exercise.
She reiterated that the police, especially those of the marine department had been adequately repositioned to face the challenges of possible security threats that might arise on the  waterways during the elections.
The AIG Maritime Command said, “my men, especially the marine police are up and doing.  They have been patrolling the waterways and we have been lecturing our men to be of good behaviour and I know they are going to perform well.
We are out to do our jobs and to be on steady patrol of the waterways.  We have the capacity to face whatever challenges that may confront us”.
Adeyemi disclosed that the tour being a directive from the Inspector General of Police (IGP), Suleiman Abba was to further strategise  on how to provide all necessary needs before the elections, and that the Eastern Ports Command needed such urgent attention that the police is ready to look into, and charged all to be of good conduct before, during and after the polls.
“It is time to make sure that the men are well kitted and provided for logistically.  Once again I am here to encourage them and tell them to be of good behaviour as to contribute their own quota to the success of the forthcoming elections”, she opined.
She however expressed optimism that the police would live up to expectation during the polls and further charged them to brace-up for whatever challenges in their constitutional duties.
Earlier, the Commissioner of Police, Ports Authority Police, Eastern Command, Mr James Caulcuick commended the AIG on the visit and disclosed that the command is being faced with operational vehicles, inadequate arms and ammunition to effectively police the ports and patrol the waterways, lack of patrol gunboats, accommodation for officers and men of the command, radio transmission network, inadequate staff and welfare packages, among others.
Caulcuick assured that with these provisions, they would perform their duties effectively with God on their side.
Also speaking, the Acting General Manager, Eastern Ports, Lawrence Alabi decried the reported incessant attacks by sea pirates robbers on the waterways, and called on the police authority to equip the marine police and provide conducive platform for them to meet up the challenges.
He also thanked the AIG, Maritime Police Command for her visit to get first hand information on the operations and challenges of the police at the ports in Eastern command.
Similarly, the AIG, Maritime Command, Mrs Adeyemi also paid familiarization visit to the Onne Port Complex Police Command. 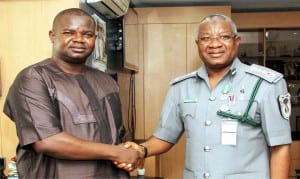 The Federal Government says it will soon unveil incentives for indigenous ship owners in the country.
The Executive Secretary/Chief Executive Officer, Nigerian Shippers’ Council (NSC), Emmanuel Jime, disclosed this recently while hosting members of the Nigerian Shipowners Association (NISA) in his office in Apapa, Lagos,
Jime, who assured indigenous ship owners that the Federal Government will soon unveil incentives to enable them acquire and maintain ships, listed the incentives to include zero import duty of vessels, abolition of the controversial temporary importation permit imposed by the Nigeria Customs Service, and setting up of a Shipping Sector Support Fund.
“Ship ownership, to me, represents a central place in the maritime industry. I can also go further to say that if Nigeria is actually going to take its rightful place and be recognized as a maritime hub, then ship ownership would become topical as far as the industry is concerned.
“So, that, to me, is the reason I consider this visit as one of the most important engagements I’ve had since my arrival in this assignment”, he said.
He noted that unless the Nigerian ship owning community grows and becomes competitive enough to take centre stage as far as shipping activities are concerned, Nigeria will not derive maximum value from the maritime industry.
According to him, the Nigerian Fleet Implementation Committee has been saddled with the responsibilities of mobilizing the public and private sectors in a bid to establish a strong ship ownership community in the country.
“We have also been mandated to develop a framework that would support the establishment of a sustainable Nigerian Fleet.
“Also, we are given the responsibility to develop strategies that will incentivise. In other words, incentives that are needed to be put in place. These are strategies that will engender incentives for ship owners.
“We are also saddled with the responsibility to set out action items that would encourage the development of ship building and ship repair facilities. Then, we will provide guidelines and recommendations to augment the maritime manpower capacity.
In response to what the stated incentives are, he said, “the first, which I believe, is topical and and which  we have been discussing is the ability to access zero import duty of vessels.
“I know that part of that has been achieved, but there are lots more to go down the road to abolish temporary importation permit to impose stringent measures. This concerns the Nigeria Customs Service.
“We believe that the key incentive is the Shipping Sector Support Fund. We are talking of shipping and it is an area that is highly capital intensive. So, if you are able to put that job of the fund in place as an incentive, other things would be easier. We also believe that waiver of export tariffs for the use of Nigerian vessels is also key,” he concluded.

Dockworkers working with terminal operators in Nigerian Ports Authority (NPA), Rivers Port Complex, have  called on the Authority to bring more sea going vessels to the Eastern Ports to boost maritime activities in the region.
They noted that improved maritime activities in Eastern ports would create employments and increase the welfare and salaries of the workers.
Making the call in an exclusive interview at the weekend in Port Harcourt, a Trustee of the Dockworkers, and Maritime Workers Union of Nigeria (MWUN), Comrade Harry Waite, said the more Federal Government and NPA bring vessels to the Ports, it would enhance and improve the living conditions of dockworkers in the state and beyond.
“We are trying to tell NPA to make sure that the Eastern Ports are empowered by bringing more vessels to the Ports, so that  dockworkers would see work to do in the terminals”.
“The more NPA brings vessels to the ports, the more dockworkers can work and earn their living”, Harry said.
While noting that Dockworkers are neither staff of government nor NPA, he said they are labour employers in private companies under the terminal operations operating in the Ports.
“Improvement in the life of the Dockworkers are in the hands of their employees, not government, and they can only improve when more vessels start coming to the four Eastern ports through the efforts of NPA.
“The more NPA brings in vessels to ports, the more the terminal operators will increase salaries and welfare of the dockworkers in the terminals”, he said.

Chairman, Lekki Port LFTZ Enterprise Limited, Abiodun Dabiri, says the Port would commence commercial operations by the fourth quarter of 2022.
Dabiri said the ongoing dredging and reclamation works have reached 89.93 percent, while the building of quay walls has reached 85.65 percent.
Making this revelation recently, while presenting Lekki Port completion status report to newsmen in Lagos, Dabiri said with 16.5meter draught, Lekki Port will be one of the deepest in West and Central Africa.
He noted that with the completion rate at 80 percent, construction work may end at the third quarter 2022 and would be feasible, while commercial operations will commence by the fourth quarter of 2022 as planned.
“We understand the significance of this project to the Nigerian economy and we would not fail to play our part to ensure that it is delivered as and when due.
“Nigeria has lost its hub status to Lome Port due to the shallowness of the draft and archaic infrastructure at the Apapa and Tin-Can Island Ports”, he noted.
The report further stated that the effort to complete construction works at the breakwater has gained significant improvement as it now stands at 79.66 percent, while the construction of the landside infrastructure at the port has gained significant attention as it now stands at 67.82 percent.
Upon completion, Dabiri said, Lekki Port would be a world-class port operating with best-in-class equipment to ensure seamless operations and would comply with global environmental protection standards.
He added that Lekki Port is the deepest seaport in the sub-Saharan African region and would serve as a transhipment hub for the region.
Earlier, Acting Managing Director, Nigerian Ports Authority (NPA), Mohammed Bello-Koko, said the agency has commenced the process of acquiring all necessary marine equipment.
Bello-Koko assured stakeholders that the agency is ready to play its part to ensure the smooth takeoff of Port operations upon completion of construction.
“NPA has commenced the process of acquiring all necessary marine equipment, including tug boats and mooring boats”, he said.