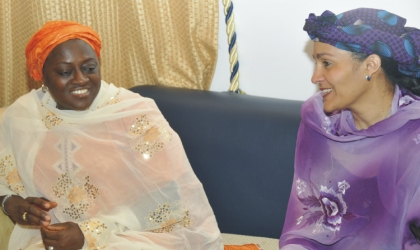 Wife of Niger State Governor, Hajiya Jummai Aliyu (left) discussing with the Senior Special Assistant to the President on MDGs, Hajiya Amina Al-Zubair, during a courtesy visit on the governor's wife in Minna on Tuesday

Some residents of Port Harcourt have commended the Rivers State Government over the recent improvement in power supply within the state capital.

The residents made this known during a survey conducted by The Tide to ascertain the level of power improvement few weeks after President Goodluck Jonathan commissioned the Trans-Amadi gas turbine during his official visit to the state.

They averred that there have been a slight improvement in power supply to the citizenry but tasked the government to do more.

One Mr Pikeme Charles, a journalist and resident of Mile I Diobu area of the city affirmed that there is improvement in power provision in his neighbourhood. He recalled that before this time power used to be  rationed within the areas.

His word, ‘ now electricity is no longer rationed. So definitely there is an increase in power supply in the state”.

But Mrs Mother Diri, who lives at Rumuigbo said her neighbourhood still suffers frequent power outage as before ‘ they used to give us power intermittently before , but now we sometimes stay for two to three days without having power”.

Another resident at the GRA axis of the city, Mrs Martha Chikezie remarked that since the inception of this year power has improved in her neighourhood at Abacha Road.

She stated that in the past one month, things started changing as power became a bit regular, “adding that, before they  used to stay for two to three weeks without power and since this area is a high brow vicinity a lot of people don’t really care because they have generator.

Mrs Chikezie further observed that for now, “within a space of two days we are sure of having electricity”

Also, Ogechi Nsirimovu, who resides at Ojike street in Diobu area, said her neighbourhood had been thrown into darkness until recently when their transformer was repaired.

Though she said she is not aware of the gas turbine project, Miss Nsirimovu explained that unlike in the past two months have shown some marked improvement  in power supply.

“At least, these days we are sure of getting power once in a day”. She however, added that power availability has not been regular as expected.

The Port Harcourt old township is not left out in the development, Godknows Nyeduko , a resident in Borokiri area told The Tide that at Rex Lawson Street, where he lives, ‘there have been a marked improvement in power supply as against the previous days when we have light and when we never had”.

But another resident, Mr Nelson Preye was of the view that power may have improved outside his neighbourhood which is still in darkness at Anokoru street in Diobu axis of the city.

Consequently, a staff of Power Holding Company of Nigeria (PHNC) who pleaded anonymity said the Rivers State Government has done remarkably well to improve power in the state in the past two years.

He said,” if all the power generated by the gas turbine is distributed, Rivers State would not experience darkness for one day, but the problem is the distribution because it has to be transferred to the national grid before it is distributed and it is not easy because of PHCN regulation monopoly.

However, few weeks ago during his visit to the state, President Jonathan announced that the federal government is poised to deregulate the power sector.

By next year, he said government would no longer be involved in generation and distribution of power, noting that it is one way to improve the sector.