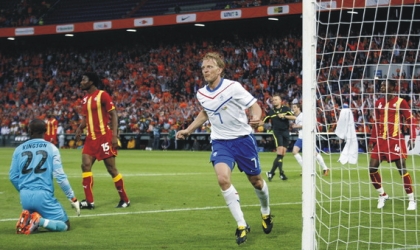 Dirk Kuyt (7) scorer of one of the Dutch’s four goals against Black stars in a pre-world cup friendly,yesterday

Not many strikers in Africa put as much fear into defenders as did the gangling Rashidi Yekini in his heydays.

More than a decade after he last played for the Super Eagles at France 98, Yekini still holds the scoring record for Nigeria.

Even though he is hardly in the public sphere these days, his words are held in high esteem. His tally of eight goals during qualifying led the country to their first World Cup participation in 1994 and he went on to score the country’s first ever goal in the tournament with a celebration that ranks amongst the most interesting ever seen.

However, Yekini, who played for Vitoria Setubal in Portugal, feels that the present crop of Eagles are not as committed to the cause of the nation as he and his compatriots were 16 years ago when they reached the second round at their first attempt.

“Most of the players in the present Eagles lack that commitment to take their individual game to the next level,” Yekini told Sportsday.

“They lack the passion to do something extra, something new and something special. It is only those that do new and special things in football that get special awards, mention and recognition.”

It is worthy of note that the total goals combined between the two leading scorers in the present Super Eagles, Everton’s Yakubu Aiyegbeni and Wolfsburg’s Obafemi Martins, is not up to Yekini’s total of 37.

“I will not rate any player because I’m not used to doing that, nor will I compare myself with anyone.

“You and I watch what other forwards do in Europe. You witnessed Lionel Messi scoring over 40 goals this past season. We saw Didier Drogba score 36 goals or so for Chelsea, but the same cannot be said of Nigerian strikers who all played alongside the aforementioned players in Europe.

“I remember when we were in Europe, I ranked among the top scorers season in, season out.”

Yekini’s expectations for the team at the World Cup are low.

“Our chances are as good as our preparations. Unfortunately, that is what most people don’t want to hear.

“Honestly, I’m not comfortable with our team. The real fighting spirit is gone. We struggle to win, we struggle to score and we even struggle to play well,” Yekini said.