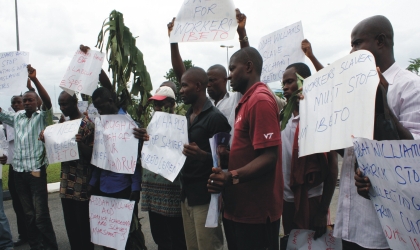 Staff of Ibeto Cement Company protesting against maltreatment to workers by the company, at the Rivers State House of Assembly, yesterday. Photo: Chris Monyanaga

President Goodluck Jonathan on Tuesday submitted to the Senate a proposal for  downward review of the 2010 budget.

Also submitted was  a supplementary budget to cater for the proposed wage increase for civil servants, PHCN arrears of monetisation and the 50th anniversary celebrations.

Mark, who read the president’s letter on the floor of the Senate, did not disclose details of the proposed amendments.

The president, in the letter, said the proposal for the review of the budget was attributable to certain challenges posed by the shortfall in projected revenue.

“I am constrained to approach the National Assembly with this request for a revision of the 2010 fiscal framework to adjust the oil benchmark price on which the 2010 budget is predicated and an amendment to the 2010 budget to revise downwards the level of aggregate expenditure.

“Certain challenges posed by the serious shortfall in projected revenue and the adverse implications financing the level of aggregate expenditure appropriated by the National Assembly, specifically, recent revenue developments indicating significant shortfalls in both oil and non-oil revenue for the rest of the fiscal year, with adverse implications for the financing of the budget,’’ it said.

The letter further said “given the drop in international oil prices from US$87 per barrel, it is prudent to revise the oil benchmark price to a more realistic level.

“On the expenditure side, it is necessary to revise downwards the aggregate level of expenditure from the N4.6 billion  approved in the 2010 Appropriation Act and adjust the budget details accordingly.

“ As I had earlier indicated when I assented to the 2010 appropriation Act, there were certain critical items such as Statutory Transfers, Debt Service, the Service-Wide Vote and other critical expenditure heads that were either inadvertently omitted or under-provisioned for.

“It has also become necessary to cater for certain unanticipated items of expenditure like the negotiated civil service wage increase, PHCN arrears of monetisation and 50th anniversary celebrations.

“It is proposed to provide for all these expenditures through a supplementary budget.”

“ It is my hope that the National Assembly will kindly consider and approve these requests expeditiously to resolve these challenges to the 2010 budget,’’ it added.