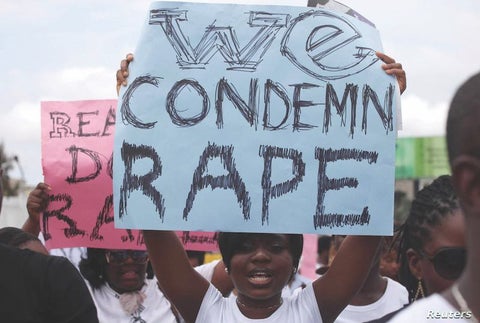 Daughter of President Muhammadu Buhari, Mrs Hanan Buhari, has decried what she described as low reportage of rape, sexual and gender-based violence cases in the country.
She said this at the inauguration of the Hanan Buhari Foundation which took place at the Banquet Hall of the Presidential Villla, Abuja, on Friday evening.
The Tide source reports that the event had in attendance top government dignitaries, traditional rulers, among others.
Mrs Buhari said that Nigeria’s rape culture had been in existence and tolerated for decades and it was time to speak out for the emancipation of women’s rights.
She added that the offence which had always been shrouded in secrecy due to ingrained patriarchal sex stereotypes, structural and systemic oppression women face, among others, must be stopped.
“Report revealed that the rape incidences for women and girls is on an increasing trend from 63 per cent in 2015 to 72.1 per cent in 2016 and 69.3 per cent in 2017.
“In spite of increase in activism, cases of rape are still grossly
underreported.
“According to data from Nigeria’s National Anti-Trafficking Agency, only 32 cases were reported between 2019 and 2020 for fear of stigmatisation.
“Undoubtedly, we need to rise up and break this culture of silence, especially now that more women are beginning to have courage to speak out about their victimisation.
“Women and children’s right to live free from violence is dependent on the protection of
their human rights and a strong chain of justice.
“In spite of acts such as Violence Against Persons (Prohibition) Act (VAPP) 2015 and various states’ Violence Against Persons Prohibition Laws in Nigeria, which are all aimed at addressing issues of rape and other forms of sexual violence, enforcement of its laws is still sorely lacking in far too many cases,” she added.
Also speaking, Mr Boss Mustapha, Secretary to the Government of the Federation, who commended the foundation for coming up with the initiative, added that it was important for victims of rape to speak out.
“We must initiative a conversation about how to deal with this scourge, especially at the family, community and the national level.
“It has been a major challenge and we must set aside the doctrines of tradition and deal decisively with the culprits.
“The punishment must also be punitive in such a way that it will serve as a deterrent to people that will ever contemplate in defiling children or rape anyone,” he said.
He also called on parents to train their girl-child to be very sensitive to some suspected acts by adults around them, stressing that they should be taught to speak out.
Also, the Minister of Women Affairs, Pauline Tallen said that it was time to change the narrative and help victims of gender-based violence to get justice.
“Before I came into office, we had only 12 states that had domesticated the child rights act, but with an aggressive campaign, I am proud to say today the number has increased to 34. We have only two states left.
“I call on all men of goodwill to start with this administration, as we fight gender-based violence.
“I commend the Hanan Buhari Foundation and your team for the great work in putting this together and for calling on all well-meaning Nigerians to join the fight against this dreaded monster that is affecting our children,” she added.