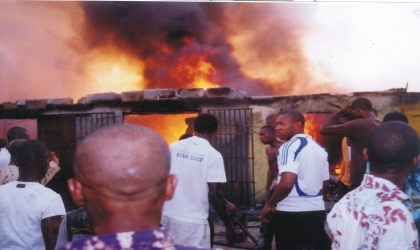 Two toddlers, a boy and a girl were, yesterday, burnt to death in a fire incident at 182 Ikwerre Road, Opposite Mile III Park in Port Harcourt.

Apart from the death of the two children, the fire also consumed electronics and other items worth millions of naira.

An eye witness told The Tide that the two victims who were aged between one and two years were locked in a room by their mother who went out with the key.

According to the account, three children were locked in the room by the woman but the eldest of them who is about four years old managed to escape through a hole during which he also suffered some injury.

Another eye witness further blamed the cause of the fire on fuel stored in jerry-cans at the back of the building which housed both residential accommodation and business stalls.

The inferno which lasted for over two hours was put off by the combined effort of both the Rivers State Fire Service and its Nigerian Agip counterpart.

Neigbours who spoke to The Tide but who did not want their names mentioned said that the mother of the two dead children, who could not be traced as at the time of filing this report, should be blamed for the death of the kids as she was always in the habit of locking up her children whenever she wanted to go out.

An official of the state fire service who spoke under condition of anonymity said that the incident would have been avoided, if residents of the state had heeded the warning against storage of fuel in jerrycans near their houses.

Meanwhile, property worth over N150 million was yesterday destroyed by raging inferno at Rumuosi timber market.

The Tide gathered that the fire started at 5.00pm like a smoke at the centre of the market.

According to an eye witness, the fire started from the waste dump part of the market. However, some timber dealers contacted expressed ignorance of the exact cause of the fire, amidst lamentations from people who lost valuable items.

Lamenting the huge losses recorded in the fire outbreak, the chairman of Rumosi Timber Market, Mr Gentle Eme, regretted  that “the real market is gone and all the machines burnt. What will I say.”

Describing the incident as unfortunate, one Mr Azumba said it was a colossal waste and called on government to assist them.