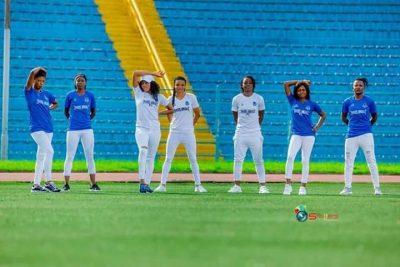 The University of Benin (UNIBEN), Sports Complex in Benin,  Edo State, will be the ideal place for women football lovers to be today, as the Jewels of Rivers, Rivers Angels FC takes on their  Edo counterpart, Edo Queens FC,  in the week three fixture of the Nigeria Women Football League (NWFL).
The match which is expected to be one of  the week three fixtures of the on-going 2020/2021 (NWFL)  Premiereship Season, will be exciting as the visitors are set and determined to take away all three points at stake in the enciunter.
The visitors have vowed to win today’s match or at least share points with their hosts. The match, undoubtedly will be a big showdown with the Angels playing away from their home, doing their best to ensure that they achieved their immediate dream of grabbing away points.
The hosts will not allow their visitors run their home for them, this will leave the host no choice than to assert themselves and take charge of the affairs of the day.
Also, they have their fans on ground to cheer them to victory, the homers will satisfy the desires of their fans by given them a total victory at the end of the 90minutes encounter.
Edo Queens FC is one of the reputable sides in the NWFL, and will prove their worth to crutch the ego of their host, who have also, recorded their supremacy in the history of the NWFL.
It would be recalled that Rivers Angels  FC thrashed visiting Delta Queens FC 6- 2 in the week two fixture of the 2020/2021 NWFL played last Wednesday at the  University of Port Harcourt (UNIPORT) Sports complex.
Edo Queens FC on their part, defeated  their hosts,  Dream Stars Ladies FC of Lagos 1-0 in their week two match played at the Agege Stadium, Lagos.

Stop Looking For The Next Jay-jay, Okocha Urges Nigerians