First week of August is
usually set aside by the United Nations as World Breastfeeding Week. It was adopted at the millennium summit in 2000 World Breastfeeding programmes have been held at this said time of the year to highlight the necessity, problems and prospects of breastfeeding.
In the previous years, emphasis had been placed on the importance of breastfeeding especially when carried out exclusively, to the child, the mother and the society at large.
Yesterday, August 7, 2014 was the climax of the programme for the 2014 edition of the World Breastfeeding week. With the slogan/theme “Breastfeeding: A Winning Goal – For Life, the 2014 World Breastfeeding week focused primarily on informing people about the Millennium Development Goals (MDGs) and how they relate to breastfeeding and infant as well as young child’s feeding.
It showcased the progress made so far and the key gaps in improving breastfeeding and infant and young child feeding (IYCF), while calling attention to the importance of stepping up actions to protect, promote and support breastfeeding as a key intervention in the MDGs and in the post – 2015 era.
Finally, this year’s World Breastfeeding Week also stimulated interest among young people of both genders to see the relevance of breastfeeding in today’s changing world.
How is breast-feeding linked to the MDGs?
The eight (8) global Millennium Development Goals (MDGs) were set in 1990 by governments and the United Nations.
The MDGs were set to fight poverty and promote healthy and sustainable development by 2015. Goal 1: eradicating extreme Poverty and hunger no doubt could be achieved through exclusive breastfeeding and continued breastfeeding for 2-years and beyond, which does not only provide high quality nutrients and adequate energy, but can as well help prevent hunger and malnutrition.
Breastfeeding, it must be noted, is a natural and low cost way of feeding babies and children – it is affordable for everyone and does not add burdens to family budgets compared to artificial feeding eg with formula.
In promoting gender equality and empowering women, breastfeeding has been found to be a great equalizer, giving every child a fair and best start in life. Most differences in growth between sexes begin as complimentary foods are added into the diet and gender preference begins to act on feeding decisions.
Talking about reduction in child mortality, this can be readily achieved by about 13% according to research, with improved breastfeeding practices alone, and 6% with improved complimentary feeding.
In addition, about 50-60% of under 5-mortality is linked to malnutrition due to inadequate complementary feeding following poor breastfeeding practices.
Concerning improved maternal health, breastfeeding is associated with decreased maternal postpartum blood loss, breast cancer, ovarian cancer, endometrial cancer and the likelihood of bone loss post-menopause.
Breastfeeding also contributes to contraception and child spacing – reducing maternal risks eg anaemia of pregnancies too close together.
How about ensuring environmental sustainability? Breastfeeding involves less waste compared to formula production involving the diary pharmaceutical, plastics and aluminum industries and reduces the use of firewood and fossil fuels in the home.
With breastfeeding, a healthier, viable, non-polluted, non-resource intensive source of nutrition and sustenance is assured.
How Far with The MDGs Today?
While we take note of some progress, there is still a lot of “unfinished business” that require urgent attention by the government. There is no gain saying the fact that progress in achieving the various MDGs is slow with large disparities between regions.
From available data, the last 20 years witnessed a reduction in child mortality by 40%, yet almost 7 million children under five die each year and mainly from preventable diseases. Under nutrition continues to affect about a quarter of all children globally.
However, the entire idea of breastfeeding can be protected by ensuring that women and their families receive scientifically factual information and support that is independent of vested business interests, eg from baby food industry and/or professionals. Implementing and monitoring the code and WHA resolutions will help protect breastfeeding.
It can also be promoted by informing and raising awareness of the importance of breastfeeding and mobilising people to take action especially during world breastfeeding week.
The idea can also be supported by providing access to information, as killed clinical help and counselling, and practical and emotional backing to mothers to enable them initiate manage and sustain breastfeeding wherever they are. Maternity protection can help working mothers continue breastfeeding. 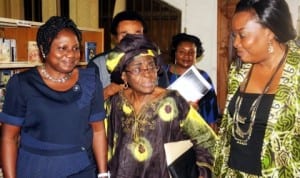 Dressing For The Wrong Reasons