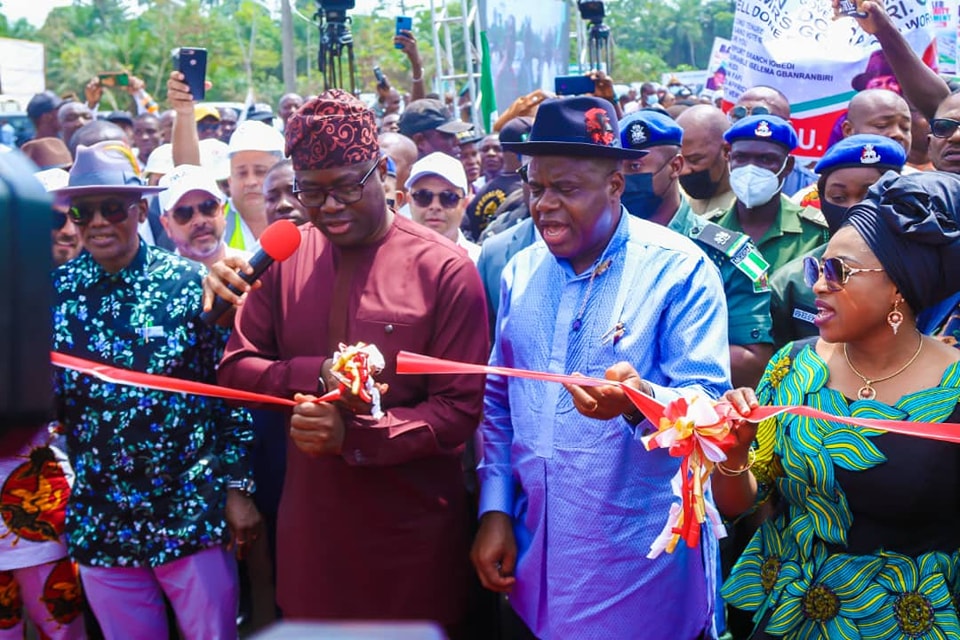 Bayelsa State Governor, Senator Douye Diri, has promised that his administration will construct more roads to link communities in the state.
Diri spoke yesterday as his Oyo State counterpart, Engr. Seyi Makinde, inaugurated the 4.5km Igbedi community road in Kolokuma/Opokuma Local Government Area as part of activities marking his second anniversary in office.
The governor in a statement by his Chief Press Secretary, Mr Daniel Alabrah, described the Igbedi road as historic as it was the only community in Kolokuma/Opokuma that hitherto was not connected by road.
The state’s helmsman lauded the people of Igbedi for owning the project and protecting it and called on other communities to emulate them.
While expressing gratitude to Governor Makinde for honouring his invitation, Diri also commended the construction company, Paache Limited, for the timely construction of the project despite the challenges it encountered.
“Today is a historic day for Igbedi community, KOLGA and the state. Igbedi was part of the communities that contributed land to build the airport. While other communities have been accessible by road, Igbedi was looking for this day and God has brought it to pass. We like to thank God who has given the administration the funds and will to construct this road. We pray for more money and we will construct more roads to link our communities”, he said
“I thank my brother-governor for coming to honour us. We appreciate you and the people of Oyo State. Let me also appreciate the contractors, Paache. Each time I visited this site, I saw them committed to their job inspite of the security challenges they faced.
“Let me also appreciate the Igbedi community. They took this job as their own and never allowed anybody to obstruct construction. That is what I expect from other communities”, Governor Diri added.
Makinde, in his remarks, lauded the performance of his Bayelsa counterpart in just two years in office.
He said roads were crucial to development of any society and described as heartwarming the fact that it is the first tarred road linking the community to the rest of the world since its existence for about 500 years.
Makinde noted that it would boost the economy of the people and usher in development.
The Oyo helmsman further stated that for governors of the Peoples Democratic party (PDP), infrastructure development was a priority and assured that they will not relent.
While thanking Diri for giving him the opportunity to be part of the history of the road inauguration, he urged the people of the state to support him for a second tenure to enjoy more development.
His words: “We cannot stop Nigerians from celebrating road projects because wherever there is road, development follows. I was amazed to learn that this is the first tarred road that links the community since its inception about 500 years ago. Your celebration is in order and I am happy too”.
“This is not just a road. It means more money in your pockets. This road will encourage transportation of goods and boost other economic activities.
“As PDP governors, we must continue to prioritise infrastructure development. Indeed, it has been two years of development in Bayelsa State and I hope you will support your governor for a second tenure.”
In a welcome address, the Commissioner for Works, Surveyor Moses Teibowei, said the conceptualisation and completion of this road was borne out of a desire of Diri the government to develop the state, saying the duration of the project was one year.
In their separate remarks, member representing Kolokuma/ Opokuma Constituency 2 in the House of Assembly, Wisdom Fafi, and the Commissioner for Environment, Mr. Iselema Gbaranbiri, both lauded the governor for the road project, saying the people of Igbedi will forever be grateful to him.