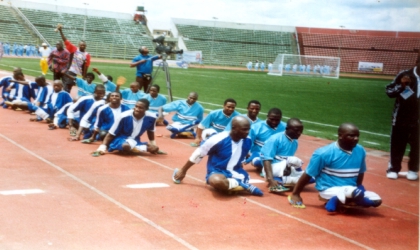 The Ministry of Youth and Sports Develop-ment has said that it is not liable to pay para-table tennis athlete Temitope Ogunsanya’s claims of $8,000 profes-sional athlete grant for attending the 2018 Commonwealth Games in Australia.
Tidesports gathered that the ministry’s position came after a committee was set up by the sports minister, Sunday Dare, to look into the athlete’s allegation of non-payment of his entitlement by the sports ministry.
The Netherlands-based Ogunsanya, who repre-sented Nigeria in the Men’s TT6-10 at the 2018 Gold Coast Commonwealth Games, said while other athletes received their payments, he was left out.
“The grant is meant to cover professional athletes’ training expenses before the competition. I represented Nigeria at the 2018 Gold Coast Games in Australia. There are some special packages, Professional Grant allowances, that the ministry gives to profes-sional athletes at interna-tional events. It depends on the events, at the Games they paid all professional athletes $8,000 each but excluded me,” Ogunsanya said.
“All my flight tickets were not paid in full. Out of $4,000, I was paid only $2,000 and I do not know why.
“I asked the former Permanent Secretary (sports ministry), Olusade Adesola, about the money several times but nothing came out of it, I have also interacted with the new Permanent secretary, Gabriel Aduda, on Twitter but nothing seems to be coming out of that too.
“I’ve been fighting it out so that they could pay me as soon as I returned from Australia, to no avail,” Ogunsanya added.
But the ministry, in a letter dated November 24, 2020, and signed by its Assistant Chief Administrative Officer, Benedict Ekanem, insisted they were not in a position to make further payments to the athlete, having earlier paid his allowances while in camp for the 2018 Games.
“According to the extant rules, only the sports minister and the Permanent Secretary are entitled to fly business class. Conse-quently, all athletes and officials were directed to comply by ensuring they flew economy (class) to and from the Commonwealth Games (Gold Coast 2018). You are hereby advised to always consult the ministry or your federation before purchasing flight tickets,” the ministry stated in the letter.
“In view of the above, I am directed to inform you that the ministry is not in a position to grant you any additional payment since you were already paid while camping in Nigeria, as it is a rule that any international athlete who participates at the local camp is not allowed to receive any international grant.”
Ogunsanya has, however, vowed to continue fighting his case.
“This is an unacceptable decision. I will still write to the minister and if that doesn’t work, I am ready to write to the Presidency. Others have been paid, I need to be paid too,” Ogunsanya added.