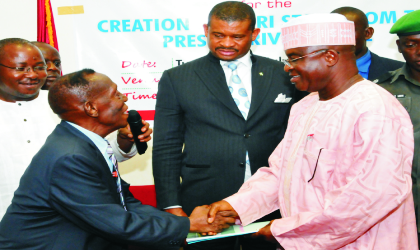 Senate President, David Mark (right) receiving a Memorandum for the creation of Bori State from the Chairman,Bori State Movement, Dr Cyrus Gbene Nunieh in Abuja, last Tuesday. With them is Senator Lee Maeba

Over 300 communities in Rivers State are to be electrified under the massive network rehabilitation scheme soon to be implemented by the state government, says the Commissioner for Power, Hon Augustine Wokocha.

Hon Wokocha who spoke to The Tide correspondent at the Port Harcourt International Airport, Omagwa said more than 300 communities that are yet to be provided with electricity would soon enjoy light through the network rehabilitation scheme.

According to the power commissioner, 200 megawatts of electricity had been injected into the scheme and another 100 commissioned at the Trans-Amadi Industrial Layout gas turbine to ensure adequate power supply in the  state.

He noted that his ministry was over the period replacing burnt transformers in the Port Harcourt metropolis and some rural communities, an exercise the commissioner hinted, would be continuous.

Hon Wokocha stated that the failure of the experimented solar system had made the ministry resort to the use of gas to provide electricity.

The commissioner assured that in no distant time, all the communities across the state would be connected to the rural electrification scheme and enjoined the people to keep faith with the Governor Chibuike Amaechi-led government.

A statement from the Port Harcourt zonal office signed by the principal Manager, Mr John Onye said the company took delivery of the transformers last week and had already installed one at YKC junction, Woji, Port Harcourt to replace the former transformer there which became faulty last year.

The remaining two are taken to Eket in Akwa Ibom State and Calabar so that the customers there will feel the impact of this giant stride”, he said

Apart from acquiring the more sophisticated power transformers, the company had also taken delivery of fifty-seven other distribution transformers of various sizes ranging between 200 KVA and 500 KVA.

“At Onne sea port, 100 transformers of the above sizes are waiting for Port clearance while 200 others transformers are being expected from over seas”, the statement further stated.

According to the schedule obtained from the Port Harcourt distribution zone, some of these distribution transformers will be deployed to various locations where transformers have been faulty and also to upgrade or up-rate some with a view to serving the people better.

He decried the clandestine activities of vandals who are in the habit of removing PHCN installations especially armoured cables of various sizes thereby throwing customers into unnecessary darkness and appealed to members of the public, particularly community leaders to set up surveillance team in their areas to curb the act.