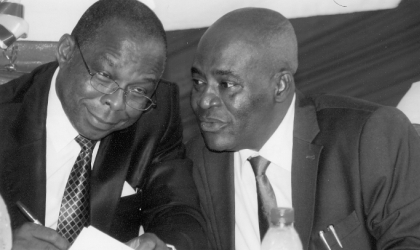 Independent National Electoral Commission (INEC) Chairman, Attahiru Jega, has assured Nigerians that the amendments in the Constitution and proposed changes to the electoral law would not have direct bearing on the conduct of 2011 general elections.

Jega told newsmen last Thursday in Abuja that section 10 (5) of the Electoral Act which provided for registration of voters, updating and revision of register to end 120 days before election, gave INEC the task of compiling new register in less than eight weeks.

According to him, “we are faced with the choice of either compiling a new voters’ register in less than eight weeks or embarking on the herculean task of salvaging the existing register in 16 weeks’’.

He, however, noted that either of the two was a difficult choice.

He said that registration of voters must end by Sept. 9, barely two months from now.

Jega said the current register lacked the credibility required for free and fair elections, adding that it was marred with inadequacies like underage registration, blank, blurred photographs and multiple registrations.

He said the option available to the commission towards credible register was to request that several parts of the electoral law, including sections10 (5), 21 and 11 (4) of the Act be modified.

Jega requested the reduction of time for the end of registration, updating and revision of register of voters from 120 days before an election, to 60 days.

“This gives an additional eight weeks, bringing the total period available to compile a new register to 16 weeks,’’ he said.

He asked for time for completion of supplementary list of voters, integration into the existing register and final certification from 60 days before election, to 30 days.

“That gives us a total of 20 weeks to attempt to salvage the existing register,’’ he said.

Jega described section 11 (4) as ambiguous, adding that it created the impression that as soon as notice of election was announced, “registration of voters must terminate’’.

He said the commission was not requesting for a shift in the date of the election.

“We are demanding for the amendments of these sections to enable the commission deliver a qualitative electoral process within the very short period.

“The exercise is going to record a qualitative improvement over previous elections,’’ Jega said.