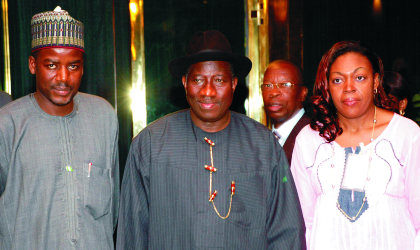 The Minister of Information and Communications, Prof. Dora Akunyili, says kidnapping is a terrorist act which Nigerians must renounce in all ramifications.

Akunyili made the declaration,yesterday in Abuja while receiving the four journalists who were kidnapped in Aba, Abia State, while returning from a conference in Uyo.

The journalists are Messrs Wahab Oba, Adolphus Okonkwo, Sylvester Okere, and Sola Oyeyipo, who are officials of the Lagos NUJ Council.

“The time is now for all Nigerians to resist this imported culture designed to frustrate Nigeria’s development.

“All Nigerians must rise up to fight kidnapping because it is fast destroying our collective good.

“Kidnapping is not only making life most unsafe, it is also stunting our economic growth by scaring away potential local and foreign investors,’’ she said.

Akunyili called on the public not to pay ransom to free kidnapped victims, noting that kidnapping is fast growing because of payment of ransom.

“I want to use this medium to appeal to all of us, individually and collectively, to resist payment of ransom since it is a major attraction to kidnapping as a business,’’ she stated.

The minister re-assured Nigerians that the Federal Government was working in collaboration with the state governments to find a lasting solution to the menace.

She urged the governors of the South-East and South-South states to evolve a coordinated strategy to deal with the rising crime in their respective zones.

Earlier, while narrating their ordeal, Oba said at a point during their captivity, they felt that Nigerians were not interested in their survival.

“We are all overwhelmed with the passion with which you (Nigerians) have handled our case.

“When we were in the jungle, we were condemning Nigerians,” he said.

He also noted that at a moment, one of them threatened not to greet the NUJ national president if he ever came across him because he believed that the secretariat was not doing anything to rescue them.

In his remarks, Okonkwo asked Nigerians to be godly, adding that some of them repented while in captivity.

Meanwhile, the Federal Government has offered to assuage the trauma they went through by asking them to choose any hotel of their choice in the country with their immediate families for a week-long relaxation on government’s bill.

In a related development, Governor Godswill Akpabio of Akwa Ibom has urged the National Assembly to enact a law prescribing death sentence for kidnapping,

Speaking with newsmen in Abuja shortly after the presentation of a book entitled: “Independence of the Legislature in Nigera- Matters Arising,’’ written by Sen. Bob Effiong, the Governor said that kidnapping was similar to armed robbery.

“The crime of kidnapping is inter-twined with the crime of armed robbery. There is no need for you to prescribe few months imprisonment for a kidnapper and then prescribe death sentence for an armed robber.

“There is really no way a kidnapper is not an armed robber, they must be treated equally. That is why the National Assembly must make a pronouncement by reviewing the law and making kidnapping an offence punishable by death,’’ he said.

Akpabio said that deliberate efforts should also be made to create employment for the youth and also re-introduce religious education in schools.

“If you have the fear of God, you will also love your neighbour. You will not in anyway attempt to kidnap your neighbor when you know that it is against the law of God,’’ he said.

The Governor said that there were lots of kidnapping dens in Abia which were well-known to security agencies.

“We have a major problem in Abia where we have a lot of kidnapping dens, which are well-known to security agencies. They are places like Agbala and most of them in Obingwa Local Government Area.

“Kidnappers have turned these areas into major dens and this is really damaging the image of the country.

“But Mr President has made it very clear that it will not be tolerated and the security agencies are now working round the clock to make sure that it is eliminated,’’ he said.

“Kidnapping is a disgraceful crime. Even the Bible says a man that kidnaps should be killed.’’

I Have No Senatorial Ambition -Prince Anyanwu