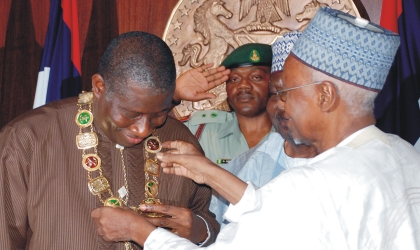 Chairman of the Presidential Task Force on Qualification and Participation of the Super Eagles for the 2010 World Cup, Gov. Rotimi Amaechi says he will open up on the funding of the Nigerian team after the competition.

“Don’t mind the Nigeria Football Federation (NFF), after the World Cup, you will hear all the truth,” Amaechi said on arrival at the OR Tambo International Airport, in South Africa on Thursday.

Amaechi, who spoke in response to a question on the state of funds for the Super Eagles, said that the exposures would wait until after the tournament to aviod distractions.

“Let us concentrate on the World Cup for now,” he said.

Amaechi restated that the task force will give the Super Eagles all the needed support to ensure they are in a good shape to do the nation proud.

“We are here to cheer them and give them all the necessary support they require,” he said.

The task force chairman said he would visit the team to find out their needs to ensure they were met.

According to reports,  many Nigerian dignitaries had arrived in South Africa to attend the opening ceremony of the mundial and watch Nigeria’s games against Argentina.

Among those who arrived were Foreign Affairs Minister, Odein Ajumogobia and Gov. Emmanuel Uduaghan of Delta, while Senate President, David Mark was being expected.

Many Nigerian artistes have also arrived to take part in events at the Nigerian Village in Johannesburg.

A Nigerian Police team to work with FIFA on security was also received at the airport by Nigerian mission officials.

Leader of the six-man team, ACP Gabriel Umar said the team would perform creditably in its duty of complementing the work of their South African counterparts.