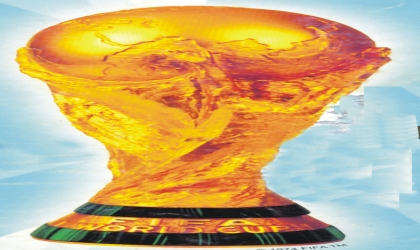 Football history takes centre-stage today as the 2010 FIFA World Cup, the 19th edition of the mundial begins in South Africa, the very first time the world’s biggest football rendezvous will be hosted on the African continent.

It is the home coming of the long term dream by the continent and an opportunity for one of its representatives to try to go all the way to the coveted trophy, never before beheld by any African nation as winners.

This edition marks the first time six countries will be flying Africa’s flag in the World Cup and the continent, which cannot wait for hostilities to begin, will expectedly queue behind each of the flag bearers in their efforts to do Africa proud.

The calabash-like World Cup stadium, with its imposing structures, aptly named Sport City, which will host the opening and closing ceremonies of the championship is already set for a colourful opening ceremony.

The usual razzmatazz of the opening ceremonies is expected to be couched in colourful, energetic and distinctly African musical fashion and would be watched live by hundreds of millions of viewers in 215 countries.

A cast of 1,581 world-class artists, dancers musicians and performers will take part in the 30 minute ceremony.

The opening match between hosts, South Africa and Mexico, which follows the opening ceremony marks commencement of the battle for the 2010 title among the world elite 32 teams.

Indeed, the usual heavyweights from Europe and South America, especially, Spain, defending champions Italy, England, the Netherlands, Brazil and Argentina are being seen by bookmakers as favourities to cart home the trophy.

But Africa believes that this is her opportunity to write her name in gold in the competition.

Amongst her flag bearers, South Africa, Nigeria, Ghana, Cameroun, Ivory Coast and Algeria, there is palpable confidence that at least one of them can go all the way inspite of the huge odds.

It is hoped that the continent should be able to prove the great Arantes De Nascimento, Pele’s proclamation that an African country would win the World Cup by the turn of the 21st century, by doing well in South Africa.

Over time, African teams have proved that they have the talent, enthusiasm and potentials to be world beaters, as shown by Cameroun at Italia’90, Nigerian at USA’94 and Senegal at Korea/Japan 2002.

But the fears are that often times they lack the discipline and organization to push through the hurdle on the biggest stage.

Thus, it is hoped that the African teams in spite of their short comings keep a cool head to make the first World Cup on the continent an evergreen historical experience for Africans and the world of football.