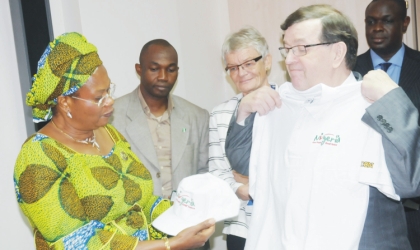 The Independent National Electoral Commission (INEC) Chairman, Maurice Iwu,  yesterday,  announced a provisional timetable for the 2011 polls with a likelihood of election starting on January 8, 2011 or April 9, 2011.

Iwu announced the timetable at a National Conference for Stakeholders in the Electoral Process in Abuja.

The chairman said the timetable was provisional, awaiting the final approval of the electoral reforms from the National Assembly.

Iwu said the second option was to retain the old order of having National Assembly elections on April 9, governorship and state assembly polls April 16 while presidential election would hold on April 23, 2011.

He argued that both options were in line with both the recommendations of the Justice Uwais-Electoral Reform Report and the existing electoral laws.

INEC boss said that the provisional timetable would start with the review of register of voters between April 26 and July 30, 2010 while the parties were expected to conduct their respective primaries between May 2 and July 31, 2010.

The Chairman said that issuance of notice of election would be made public on August 2, 2010 while collection of forms from the commission by political parties would start from August 23, 2010 to September 14, 2010.

He said the last day for submission of nomination forms to the commission for National Assembly poll would be Sept 20, 2010, governorship and state assembly elections; September 27, 2010 while presidential poll would be on October  4, 2010.

According to Iwu, the last day for publication of particulars of candidates for the National Assembly elections will be September 27.

He added that the governorship/state assembly elections would be October 4, and presidential elections on October 11.

Iwu said the display of voters register for purposes of claims and objections would be between October  18 and October 30, 2010, while public campaign by political parties would start on October 9, 2010.

Other highlights of the timetable include last day for change/substitution of candidates by political parties between November 4 and November 18, 2010 in line with section 34 and 36(2) of the Electoral Act.

The timetable also include last day for publication of personal particulars of substituted candidates for National Assembly, governorship, state assembly and presidential elections between Nov. 19 and Dec. 2, 2010.

Iwu said that collection of nomination forms for all positions would commence on November 2, 2010 and end on November 16, 2010 while the submission of candidates’ particulars would hold between November 22 and November 29, 2010.

He said the commission would from December 23, 2010 publish the notice of poll for all elections while submission of names of party agents to the resident electoral commissioners (RECs) would be between December 31, 2010 and January 14, 2011.

INEC chairman said the last day for campaigns for National Assembly elections would be on January 7, 2011, governorship/state assembly January 14, and presidential elections on January 21, 2011.

Iwu assured Nigerians that the commission would keep faith with the timetable and urged all stakeholders to play the games according to the rules.

Meanwhile, the Acting President, Dr Goodluck Jonathan has reiterated the resolve of the present administration to conduct a free and fair elections in 2011.

Declaring open the three-day National stakeholders conference on electoral reforms organised by INEC, Dr Jonathan said the electoral integrity of the country would be based on projecting the right attitude and by providing the enabling environment for the elections to hold.

Similarly, the Senate has reacted to the time table released by INEC ahead the 2011 elections saying it would not affect the ongoing electoral reform bill at the floor of the National Assembly.

The chairman, Senate Committee on Information, Senator Ayogu Eze, stated that by the time the new electoral act is passed, INEC would have no option but to amend the time table.

Senator Eze argued that contrary to criticism in some quarters over the review of the 1999 Constitution, including the electoral reform exercise was still on course.

He added that the Senate would soon commence debate on the report presented by the committee on Electoral Reform by next week. The Senator therefore appealed to Nigerians to be patient as the National Assembly is poised in giving an electoral act that would stand the test of time.