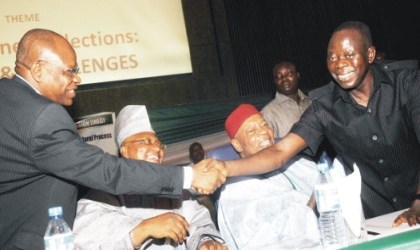 Chairman,Independent National Electoral Commission, Prof. Maurice Iwu (left) in a handshake with Gov. Adams Oshiomhole of Edo State, at the INEC National Conference for Stakeholders in the Electoral Process, in Abuja. With them Are, Representative of the Senate President, Sen. Isiaka Adeleke (2nd-left) and Chief Arthur Mbanefo.

No fewer than eight persons were said to have been roasted alive in a Mercedes Benz car while six were said to be seriously injured when two bombs suspected to have been planted by militants exploded at the government house annex, venue of the dialogue.

The event which was to kick start the restoration of hope in the Niger Delta came to abrupt end after the second successive explosives went off shattering the glasses at the hall and causing pandemonium.

In a statement signed by the state commissioner for Information, Mr. Oma Djebah described the  act as “cowardly” and vowed to get to the root of the matter.

“The peoples of the Niger Delta will not be intimidated nor deterred by the cowardly act of a few opposed to a peaceful and non-violent approach of resolving the historic grievances of the region, the statement said.

“We assure all that we will not be deterred in our determination to fast-track the development of our people”.

The President, Ijaw National Congress, (INC) Dr Atuboyedia Obianimi, in his reaction said, “It is unfortunate. I don’t know who would have done this. To the best of my knowledge and as a lover of humanity, what happened was wrong, unacceptable that anybody will plant bomb to take lives.

“We should be quick to find out the motive for the disruption. Ijaw National Congress condemns the action. But for God lots of lives would have been lost. INC condemns the development. This is not good for our region. The organisers and the government should look into details to find out why this occurred. We should look at his matter because it is at the heart of security and confidence building,”Obianime said.

Comrade Igbini Odefe Emmanuel , the 2007 governorship candidate of the Peoples Redemption Party (PRP)in Delta State and a non-violent Human Right Activist in Niger Delta , in his reaction said, “It is totally alien to our cherished culture and tradition being peaceful, articulate, republican and united people of Delta State and very embarrassing for us that our visitors had to be treated to this kind of unfriendly and hostile reception.

Meanwhile, a faction of the Movement for the Emancipation of the Niger Delta (MEND) has dissociated it self from the current violent act, saying they are committed to peace.

The group, believed to be loyal to Government Ekpemupolo, stated that they have no hand in the incident as they will continue to support peace in the region, but many feared that a splinter unit of MEND may be responsible for the explosions.

In a related development, the Bayelsa Commissioner of Police, Mr Onuoha Udeka, said on Monday that policemen have been placed on red alert at all the entry points into Yenagoa and its environs.

Reacting to the bombing in Warri, Delta, on Monday, Udeka told newsmen in Yenagoa that policemen had blocked all entry points to Yenagoa.

The commissioner called on all residents of the state to remain vigilant at all times and report any suspicious movement to the nearest police station.

In his reaction, the Acting Chairman of the Action Congress (AC) in Bayelsa, Mr Ebikibina Miriki, described the bombing incident as uncalled for.

“The gestapo act is condemnable, most especially at a critical moment when the country was battling to free itself from the sledge hammer of the inclusion of Nigeria as a terrorist nation,” he said.

He said the AC would sue for peace and restraint from acts capable of derailing the amnesty process, more so that the zone now had one of their own as the acting president.