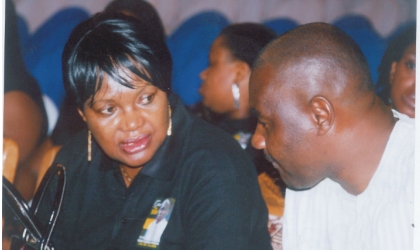 In spite of the resolution by the House of Representatives for the redeployment of Batch ‘A’ 2010 National Youth Service Corps (NYSC) members from Plateau, some of the corps members have rejected the redeployment.

Our correspondent who visited the Jos Orientation Camp on Thursday reports that no fewer than 1,015 out of the 1,211 corps members have registered, with more still arriving.

Some of them told our correspondent that they were ready to serve their fatherland in Plateau and that the security problem was not limited to the state but was a national issue.

Jemila Benzi, an indigene of Adamawa, said that although the National Assembly was representing the people and had the interest of the citizens at heart, she was comfortable serving in Plateau.

“I am comfortable wherever I am sent to serve my fatherland. Anywhere I am sent, I will go because I believe that God has a plan for me.

“You can never get some of the foods and the weather they have on the Plateau elsewhere in this nation. I love this state even though there are challenges, I believe things will be okay,’’ she said.

Another member, Joshua Danjuma from Gombe State, said: “I am not seeking for any redeployment because I have made up my mind that since I’ve already prepared my mind to serve the country, I will definitely stay and serve.

“My advice to government is to provide adequate security for all Nigerians. It is not only in Plateau.”

Yetunde Aluko from Osun said she would not have considered redeployment but for the pressure from her parents and other family members.

“I want to redeploy simply because my family members are not happy that I’m here now and they are very worried. And because of that, I really feel I should redeploy to another state in the north,” Aluko said.

For Oguntoye Olanrewaju from Ogun, he was redeploying from Plateau on health grounds but would have loved to serve in the state.

“If not for the medical reason which I want to redeploy, I wouldn’t mind staying here as there is no much pressure from my parents.

“All they told me is to try as much as possible to keep to the words of our officials in the camp and behave responsibly, so no pressure from them,” Olanrewaju said.

Obong Cletus, an accountancy graduate from the University of Calabar, said every Nigerian needed security and urged the government to secure the lives and property of the citizens.

Cletus wondered what would happen to the thousands of Batches ‘B’ and ‘C’ corps members to be posted to Plateau.

“Are they also going to be redeployed? Will government redeploy the NYSC officials, civil servants and new students of higher institutions?’’ he queried.

The Head of Public Relations in the NYSC in Plateau, Mr Sam Nkwopara, told our correspondent that redeployment forms were given to the entire Batch ‘A’ corps members but that less than 400 had indicated their interests to redeploy.

“We gave all of them redeployment forms but some who submitted have come back to withdraw them but we say no, until they write letters of withdrawal again.

“Most of those who wanted redeployment are those with medical and marital reasons. Don’t forget that some of those in camp have their parents, husbands and families here in Jos and have nowhere to redeploy to,” Nkwopara said.