The recent revelation in a piece published on Sunday by an ex-international that captain of Nigeria’s Golden Eaglets, Fortune Chukwudi may have been older than the stipulated age for Under-17 players has continued to raise dust in football circles.

According to the ex-international, Chukwudi was a member of Sharks FC‘s feeder team about seven years ago and was said to be 18 years old at the time

It now confounds reason for the same player to be eligible for an Under 17 years competition in 2009.

However, in a swift reaction, the Nigerian Football Federation, NFF had labeled the ex-international an anti-Nigeria.

‘It is shocking that somebody can take personal hatred and vendetta to this level”, said NFF’s acting secretary-general, Barrister Musa Amadu.

Amadu further explained that the magnetic resonances imaging, MRI test was carried out on the players at the National Hospital, Abuja and the famous Aspire Academy in Qatar.

But a chairman of one of the top premier league clubs in he country who did not want his name in print said that the over-age issue raised by the ex-international was a serious one.

He said that the development does not calls for name –calling or abuse but should be examined on its own merit.

“In stead of instituting a panel to investigate the veracity of the claim, the NFF is busy playing the ostrich, it won’t help our football’, he summed up

For former board member of NFF, Deacon Walter Inegbeneoise, if the player actually passed the FIFA MRI test, there’s nothing the federation would do, but there may be faceless persons at the NFF perpetrating all these negative acts that may haunt Nigeria one day.

“ The earlier such people are eliminated and the right thing done, the better for our football’, said Inegbenoise.

FIFA vice president and coordinator of the FIFA Under-17 World Cup, Jack Warner, however said that the MRI test is ongoing.

Just like the dope test, a couple of players are selected randomly from a team after a match and tested, and if anyone fails the test, the matter would be taken to  to FIFA and discussed, even the teams that have crashed out of Nigeria 2009. 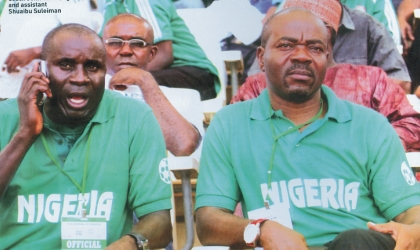