As part of efforts to check the spread of malaria in Rivers State, the federal government in collaboration with the Rivers State Ministry of Health (RMOH) will embark on house-to-house distribution of 2,293,000 Insecticide Treated Nets (INT) in Rivers State.

The exercise billed to take place in December is part of the federal government national malaria control programme.

To ensure effective distribution of the nets, Mr Onififumefoa said household mobilization officers would first go house to house to distribute net cards and that after seven days those issued net cards would be required to redeem their nets at designated distribution sites.

In each distribution site, there will be one supervisor, two distributors, three security men and one health educator, he said.

He further explained that during the house-to-house distribution, there would be supportive supervisory networks in every council.

“In every LGA we would have a state supervisor, technical assistant and an independent monitor, he explained.

Meanwhile, Mr Onififumafoa revealed that about 1,132,219 nets have already been supplied to the state while the remaining 1,160,781 would be supplied in March, 2010.

Wile lauding the team for their effort so far in the   fight against malaria, the Rivers State Commissioner for Health, Dr Sampson Parker assured the preparedness of the state government to render assistance in order for them to fulfil their targets.

Dr Parker also urged members of the national malaria team and members of the various committees inaugurated for the purpose to, in addition to the distribution of nets also identify possible breeding grounds of mosquitoes for eradicating, if the exercise must be a success. 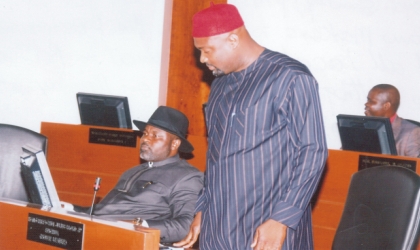 Leader, Rivers State House of Assembly, Hon Chidi Lloyd (standing) presenting a bill aimed at checking the performance of Local Government Councils in the state at the House sitting, Monday