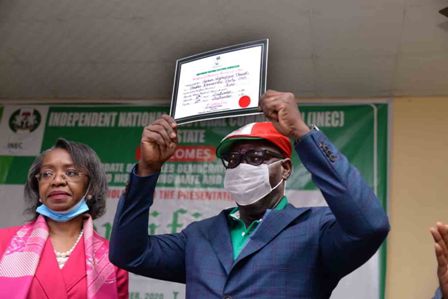 The Independent National Electoral Commission (INEC), yesterday presented Certificates of Return (CoRs) to the winner of last Saturday’s governorship election in Edo State, Governor Godwin Obaseki, and his running mate, Mr Philip Shaibu.
The Tide source reports that the ceremony took place at the Collation Centre, at the State headquarters of INEC in Benin.
The Edo governorship election Returning Officer, Prof. Akpofure Rim-Rukeh, had on Sunday declared Obaseki of the Peoples Democratic Party (PDP) winner of the governorship election in the state.
Rim-Rukeh had declared Obaseki winner after polling 307,955 votes to defeat his closest opponent, Pastor Osagie Ize-Iyamu, of the All Progressives Congress (APC) who garnered 223,619 votes and 12 other candidates.
The INEC National Commissioner in charge of Edo, Bayelsa and Rivers, Mrs May Agbamuche-Mbu, presented the certificates of return to both the governor-elect and the deputy governor-elect.
Agbamuche-Mbu said that the presentation of the CoRs was a statutory obligation of the commission which must be carried out within seven days after its declaration of a winner.
“This occasion is only made possible because of the successful conduct of the governorship election last Saturday, September 19.
“INEC, I believe, has played its humble part but we have always maintained that a successfully conducted election is a collective effort, and so it has proven to be,” she said.
In his acceptance speech, Obaseki thanked God and Edo people for a peaceful election, adding that history had been made in the state.
Obaseki said INEC’s National Chairman, Prof. Mahmood Yakubu, should receive most of the accolades for his steadfastness and ability to withstand pressure, adding that using his intellect in introducing technology for the election should be hailed by all.
“Despite all the criticisms, the ability of INEC to view results as the counting is taking place in polling units is one innovation we will implore INEC to maintain and improve on”, he said.
“Because it has introduced different element of transparency in the way we conduct election in Nigeria
“I am using this opportunity to extend a hand of fellowship to my brother, Osagie Ize-iyamu, and other colleagues in the APC to work with us to move Edo forward.
“On a specific note, I want to use this occasion to call on former National chairman of the APC Adams Oshiomhole that the fight is over, to come and join in building the house where he was part of laying the foundation.
“We have no malice; the only thing we disagreed on is on the approach in moving Edo forward.’’
Obaseki, who also commended President Muhammadu Buhari, said the president would be remembered as the father of democracy in Nigeria.
“This is because he had a choice to ensure and insist that his party wins in the state but he rose above partisan politics, and insisted the right be done,” he said.
According to him, I want to finally thank his royal majesty, Oba of Benin, Oba Ewuare II, for his fatherly role, for the prayers for peace, and for being that symbol we all look up to.
Earlier in his address, the state Resident Electoral Commissioner of INEC, Mr Johnson Alalibo, said the ceremony was just another fulfilment of the provisions of the law.
“My joy knows no bound as I am standing here to present this welcome address, having conducted an election without any loss of life,” he said.
Alalibo commended the candidates, security personnel and the entire people of Edo for their display of professionalism and maturity during the election.
According to him, this election has already been adjudged as one of the best and it shall so remain in the annals of our history.

Even This Pain Shall Pass Away

The Colours Of Political Corruption

Etymologically, the word ‘corruption’ is derived from the Latin world ‘corruptus’ which means ‘to break’ or ‘destroy’. Ifesinachi (2003:25) sees it as “the breaking of normal or social norms or practices”.
The World Bank defines corruption as “the abuse of public office for private gains. Public office is abused for private gain when an official accepts, solicits or extorts a bribe. It is also abused when private agents offer bribes to circumvent public policies and process for competitive advantage and profit. Public offices can also be abused for personal benefit even if no bribery occurs through patronage, nepotism, theft of State assets or the diversion of State revenue”.
Corruption is also seen as “the behavior which deviates from the formal duties of a public role (elective or appointed) because of private wealth or status gains.” (Nye, 1967).
The Transparency International simply sees corruption as “the dishonest or preferential use of power or position which has the result of one person or organization being advantaged over another,” while the Vision 2020 Committee essentially termed corruption to be “all those improper actions or transactions aimed at changing the moral course of events, judgement and position of trust”.
However, Section 2 of the Corrupt Practices and Other Related Offences Act, 2000 sees corruption as including “bribery, fraud and other related offences”.
From the foregoing, one can deduce that corruption is that which is morally unacceptable; an act intentionally meant to place one or an organization at an advantaged position over others in a system. It is essentially an act that perverts the social norms, laws and moral ethos of a given society.
Based on the above, it is obvious that the monster of corruption pervades every stratum of the Nigerian society. It reveals itself as bribery, tribalism, nepotism, electoral fraud, embezzlement, ’kick-back or ten percent’, money laundering and fraud (419), examination malpractice, child abuse, child trafficking, patronage, graft, extortion, tax evasion, perversion of justice among the police, the judiciary etc, and falsification of certificates, just to mention but these.
Corruption in Nigeria is akin to a public liability company, which one may call “Corruption Incorporated,” operated by the ruling class and the comprador bourgeoisie. It is a prosperous company where most Nigerians own shares that yield appreciable dividends. In fact, corruption in Nigeria takes various forms which only a specialist in the subject can adequately explain.
However, for the purpose of this discourse, I will dwell on political corruption. According to an author, Adeleye, political corruption is ‘corruptocracy’, a government of the corrupt by the corrupt and for the corrupt. And in that kind of government, there are no rulers because anything goes”.
One can also define political corruption as the abuse of public or governmental power for illegitimate private advantage, or the illegal, unethical and unauthorised exploitation of one’s political or official position for personal gain or advantage. Political corruption is, therefore, an effort to secure wealth or power through illegal means for private benefit at public expense”.
Political corruption, simply put, is the use of legislative power by politicians or decision i.e. government officials for illegitimate gain. This entails the use of civil servants or bureaucracy to misuse and abuse governmental power that exists in a state for other purposes. It also involves an illegal act by an office holder which is directly related to their official duties.
On the attainment of independence on October 1, 1960, hopes and aspirations were high in the country.
At least, Nigerians were to pilot their own affairs. We were to use our God-given resources to better our lot. In any case, the new Nigerian leaders were to redeem pledges they made to Nigerians to put an end to capitalist exploitation, dehumanisation, degradation, unemployment, the non-guarantee of basic freedom and liberty, and the maintenance of egalitarian principles and sustainable development. What have Nigerians got from our leaders since Independence?
Did Nigerian leaders fulfill the aspirations and expectations of the masses? Have poor Nigerians, who are in the majority, benefited from Nigerian leaders since Independence? The answer to the posers listed above is an emphatic NO. Nigerian masses have now become a metaphorical representation of a woman that was consistently raped, and was crying for help. Behold, a helper came and elbowed out the rapist, but continued the action from where the rapist stopped. Interestingly, history, which is benevolent and generous to a fault, has it that the track record of Nigeria from 1960 has been the accounts of misappropriation of funds, embezzlement or looting of treasury, and “settlements” through graft and contracts, as well as jumbo or fabulous emoluments for lawmakers, among others. Where will this take Nigeria?
Samuel is of Ignatius Ajuru University of Education, Port Harcourt.