The Commissioner for Insurance, Mr. Fola Daniel, has explained that the National Insurance Commission (NAICOM) introduced the oil and gas guideline for the sector in order to increase insurance firms’ market.
A statement on Sunday quoted Daniel as saying this during a sensitisation workshop for stakeholders on key initiatives of the commission in New Karu, Nasarawa State.
Daniel said, “To ensure that the insurance industry leverages the Nigerian Oil and Gas Content Development Act, 2010 to further expand its market, the commission developed a guideline for the industry.
“The guideline serves as a roadmap on how oil and gas insurance business should be conducted in Nigeria.”
He said the Nigerian insurance industry had witnessed tremendous changes in recent times owing to the reforms embarked upon by NAICOM.
The reforms, according to the commissioner, include the introduction of risk-based supervision; migration to the International Financial Reporting Standard (IFRS) from the Nigerian Generally Accepted Accounting Principles; market conduct reforms; claims settlement reforms; and financial inclusion, among others, all geared towards developing the industry and improving the general perception of insurance.
According to him, the reforms are in line with the Federal Government’s Vision 2020 of deepening insurance penetration and for the industry to be one of choice in emerging markets in terms of capacity, safety, transparency and efficiency.
“It is our belief that the country is much likely to attain a sustained economic growth and development if it can adapt its insurance industry with innovative ways that will bring on board the generality of the country’s population,” he said.
The NAICOM boss said the commission introduced the Market Development and Restructuring Initiative in 2009, to among other things, enforce compulsory insurances and eradicate fake policies in the country.
The initiative, Daniel added, had been vigorously pursued by the commission across the six geo-political zones of the country.
He also said that having recognised the urgent need to develop the retail insurance market, which has remained grossly untapped considering the vast population of the country, it became imperative for the commission to incorporate micro-insurance and takaful as important vehicles for achieving greater insurance penetration in the country. 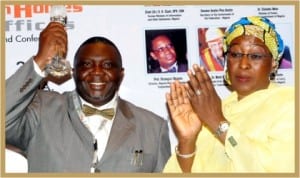 Director, West Africa Exhibition and Conferences, Mr Kune Igoni (left), displaying a Diamond Award of Excellence he received on behalf of Adax Petroleum at the opening of an Oil and Gas Upstream and Downstream Conference in Abuja, yesterday. With him is the representative of the Secretary to the Government of the Federation, Dr Jamila Shuara, who presented the award.