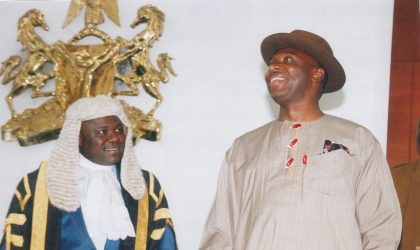 Rivers State Governor, Rt Hon Chibuike Rotimi Amaechi (right) with the Speaker of the State House of Assembly, Rt Hon Tonye Harry during the former’s visit to the Assembly as part of activities to mark his 2nd year in office, Thursday. Photo: Chris Monyanaga

In a snub to recent ex-presidents and heads of state in Africa , organizers of a multimillion- dollar annual prize for good governance on the continent said Monday they had decided not to give out the award this year.

The Ibrahim Prize for Achievement in African Leadership is awarded only to democratically elected heads of state who have left office in the past three years. That requirement limits the pool of contenders, eliminating the continent’s strongmen leaders, some of whom have held onto power for decades.

The committee considered “some credible candidates” but could not select a winner, said former Botswana President, Ketumile Masire, a board member of the Mo Ibrahim Foundation.

Created in 2007 by Sudan-born billionaire Mo Ibrahim, The Ibrahim Prize for Achievement in African Leadership awards the winner $5 million over 10 years and $200,000 annually for life thereafter to encourage leadership that improves the prospects of people in the continent. Ibrahim was asked at a news conference Monday about politicians who meet the award criteria but were not chosen, including former South African President Thabo Mbeki, former Nigerian President, Olusegun Obasanjo and ex-Ghanaian President John Kufuor.

The founder of the African telecommunications company Celtel International said the foundation had “full respect” for those leaders. It was unclear why the committee, which is independent of the foundation’s board, was unable to choose one for the prize. Masire said the foundation “noted the progress made with governance in some African countries, while noting with concern recent setbacks in other countries.” Committee members said they could not discuss their deliberations.

The decision not to award the prize is a mistake if the foundation truly wants to encourage good governance, said Stephen Chan, a Professor of International Relations at the School of Oriental and African Studies in London .”I would imagine that they are thinking about raising the bar and having raised the bar they have found that no one could get over the bar,” he said.”No one expects African governance to be perfect at this time. Trying to find the perfect statesman to give an award to is going to result in a lack of awards year after year,” he said.