The Rivers State Government has revealed that the money in its compulsory monthly savings account,  opened 17 months ago is now N17billion.

Governor Chibuike Rotimi Amaechi said the state government may not access the funds in line with the law it signed mandating the present government to save N1 billion monthly from revenue accruing to the state from all sub-heads.

Governor Amaechi made this revelation yesterday while briefing a delegation from the National Defence College, Abuja, at Government House, Port Harcourt, during their one week Geo-strategic study tour of the state.

Governor Amaechi said the money is for future investment anywhere in the world, in any business that would  be lucrative for the state, stressing that Banks could borrow from the funds and give Rivers State Government returns on investment.

He remarked that this achievement is coming at a time that the state lost about 200 oil wells to neigbouring states.

He said the Government has recovered about N400 million per month from the automation of civil servants salaries, an amount which he said, the state government was losing per month for the number of years that the system was not automated, noting that the figures would come down when Government finishes the bio-metrics component of the exercise.

Governor Amaechi said the Public Procurement Law makes the award of contracts in the state to be transparent and affords anybody in the country or the world an avenue to compete, thereby reducing the cost of the projects carried out by the government.

He said the bills on Fiscal Responsibility and Financial Management is before the State House of Assembly and when passed, it would help in strengthening government transactions and reduce corruption.

The Governor explained that the demolition of waterfronts is for the security of the people, adding that the present administration is committed to the enforcement of law and order in the state.

Earlier the Leader of the Team, Commodore Johnson Olutoyin said they were in the state to carry out a Geo-strategic study of Rivers State, particularly with youth empowerment as a strategy for maintaining security in the state.

He said nine states were selected for the tour, while eight teams are also touring other states, pointing out that at the end of the tour, the teams are expected to produce the reports of their findings and make presentations.

Later, the team was conducted round some ongoing projects embarked upon by the state government under Governor Chibuike Amaechi, which took them to several projects including hospitals, new model primary and secondary schools, the Trans Amadi gas turbine projects, among others.

In an interview with newsmen, the Team Leader, Commodore Johnson Olutoyin said what they have seen shows great effort at delivering dividends of democracy to the people, noting that maximum value is being gotten from the money spent.

He explained that the infrastructure provided would be of utmost benefit to Rivers people, and solicited the cooperation of all to enable the government actualize the vision for the state. 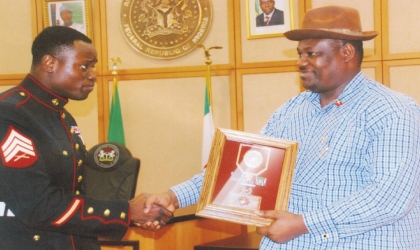