Governor Amaechi who disclosed this yesterday while on an inspection tour of facilities at the Institute in Bonny, Headquarters of Bonny Local Government Area said the tour was aimed at identifying areas that needed attention to get the institution functioning.

The Governor explained that the Federal Government had directed him to identify the number of structures that have been completed and the ones yet to be completed with a view to getting the Institute started.

He observed that five of the structures which comprise lecture halls and hostels have been completed while work is ongoing on two others, and pointed out that the premises of the institute needed sand-filling and fencing to safe-guard the facilities there.

According to him, the institute also needs roads, water, electricity as well as the

building of lecturers’ quarters, and expressed the hope that with the completion of the necessary facilities the institution would be made to function soon.

It would be recalled that the foundation stone of the Federal Technical Institute, Bonny was laid by the immediate past President of Nigeria, Chief Olusegun Obasanjo on 22nd September 2000.

Meanwhile, the state Government has called for the support of the National Assembly in ensuring that federal projects are executed in the state.

Governor Amaechi made the call  yesterday when a delegation of members of the House of Representatives Committee on Works paid him a courtesy visit at Government House, Port Harcourt.

Governor Amaechi who decried the lack of federal presence in Rivers State in terms of project execution regretted that even the existing federal roads such as the Aba Expressway, the East/West and Ikwerre roads have all been abandoned.

“I am not aware that there is any road the federal government is doing in Rivers State”, the governor said as he pointed out that because of the embarrassment and challenges caused by the deplorable condition of the abandoned federal roads the state government has taken over the responsibility of maintaining them.

The governor explained that apart from constructing flyovers on the Aba Expressway, and the Eliozu junction of the East/West Road, the state government has equally awarded a N21 billion contract on the rehabilitation of Ikwerre road which he said has almost collapsed.

He said that the Bodo/Bonny road which contract was awarded since 2005 has also been abandoned and noted that even though most of the multi-national federal concerns such as the Eleme Petrochemical Company, the Refineries and NAFCON were established in Rivers State, the state is not remembered in the distribution of federal projects.

Governor Amaechi observed that the Federal Ministry of Works in the state may have decided to overlook the deplorable state of federal roads with the assumption that Rivers State has a lot of money arguing that such assumption is wrong as the state has so many problems.

He explained that as a result of the difficult terrain of the state it is expensive to construct roads here and appealed to the lawmakers to also prevail on the Federal Ministry of Works to live up to its responsibilities by maintaining  federal roads in the state.

The governor equally pointed out that the bad condition of roads in the South-South and South Eastern parts of the country was hampering the economy of the regions because investors were pulling out as a result of poor road network.

Earlier, the Chairman of the House of Representatives Committee on Works, Hon. Kabiru Abdullahi Jalo who led the delegation said they were in the state to carry out their nationwide inspection of ongoing projects in the South East and South-South geo political regions as part of the oversight function of the Committee.

According to him, the essence of the inspection was to assess the level of implementation of projects for which monies were appropriated and to involve all stakeholders to appreciate the challenge and the need to address the rot on our roads. 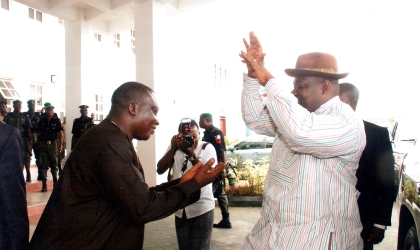