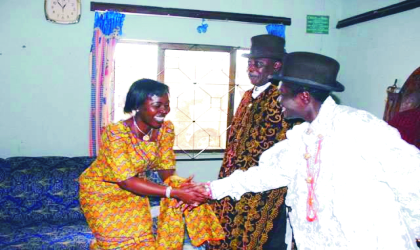 Wife of Bayelsa State Governor, Mrs Alanyingi Sylva (left) being welcome to the palce of the Amayanowei, Odi by HRM King Mozi Agara Ibiyanowei of Kolokuma clan while King Shine Apre, Amanyanowei of Odi (middle) , listens during a courtesy visit.

No fewer than 16 countries, including Nigeria, United States, Congo, Denmark, France, Senegal, and Spain have signed the Rotterdam Rules, which is a United Nations (UN) convention on contracts for the international carriage of goods wholly or partly by sea.

The Rules were signed on September 25. Other countries which signed are Switzerland, Togo, Gabon, Ghana, Greece, The Netherlands, Norway, and Poland.

Presently the Managing Partner of a Lagos based firm of legal practitioners, Paul Usoro and Company, Usoro said a signing ceremony was held in Rotterdam last month and the convention is now known as the Rotterdam Rules. The convention has 96 Articles.

She said it was not her intention to take the participants at the international symposium which attracted delegates from West and Central Africa sub-regions through the entire convention.

“It is intended to present an overview of the convention and in doing so will highlight the provisions that are critical to our sub-region and hopefully will offer some assistance in advising ministers regarding the issue of ratification”, she said.

She explained that there was need for the players in the maritime industry in the two sub-regions to be conversant with what she called the ‘underlying legal issues’, which govern the actual movement of goods from one point to another.