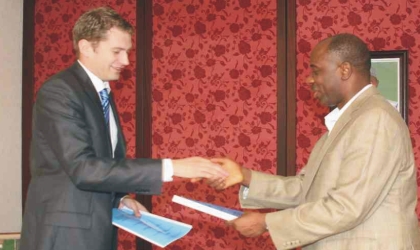 Out of the six, two were new commissioners including Ibim Seminetari, who until her appointment was the publisher of a weekly magazine, Business Eye and Dr Dawari George, a former youth leader, while four of the commissioners were in the last dissolved cabinet.

Speaking at the ceremony, Governor Amaechi, charged them to render selfless service and be transparent in their dealings with the people.

According to him, “the only reason why you were appoint is for service, and it must not conflict with any other interest”, explaining that government office is not a place where people come to share money but to deliver service.

“Use public money for public purposes not for private use, it is not time for funfair, but time for serve and make the people of Rivers State happy”, he declared, pointing out that the state lacks basic infrastructures which requires concerted efforts to develop.

The governor said the state has the potentials to be a model in the country and urged the new commissioners to discharge their duties creditably.

He warned that he would not hesitate to remove anyone found wanting in the discharge of his duties, emphasizing that they should not give him the opportunity to dissolve the cabinet another time.

Governor Amaechi cautioned the commissioners to make open the processes of contract awards to the public and operate an open door policy to enable the people have access to their offices.

The new Commissioner for Information, Mrs Ibim Seminetari who spoke with newsmen shortly after the swearing-in ceremony said her vision is in line with the commitment of the state governor to ensure the development and progress of the state.

This brings to 26, the number of commissioners in the state.