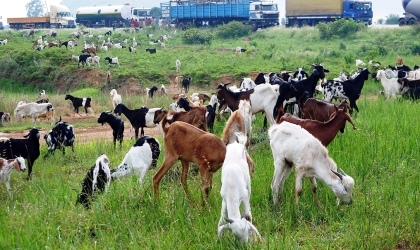 An animal health technologist, Mr Oluleye Odetola, has described livestock farmers in Nigeria  as constituting important element in the economic development of the country.
Odetola said this recently in a chat with The Tide source on the sidelines of the 2022 annual retreat of the Nigerian Association of Animal Health and Husbandry Technologists (NAAHHT), Oyo State Chapter, held at National Museum of Unity, Ibadan, the Oyo State capital.
He noted that livestock farmers play major role in the economic development of the country, particularly in employment creation.
“Livestock business create not less than 70 percent employment for the citizens of Nigeria. Because from every phase, be it small, medium or large scale business, having yourself in fold, you will still be coping with the condition of this country economically.
“So, livestock farmers are real people, real citizens as far as Nigeria is concerned. They create jobs, food and they make things easy for others. In summary, livestock farmers deserve to be respected and supported in all ramifications”, he said.
Another animal health technologist, Mr Abiodun Akinboade, while speaking on sales and marketing as it relates to the theme of the retreat, “Animal Health And Production Technologists As Key Players in the MSMEs In Nigeria”, said sales and marketing are the pillars of every compant and that is the area where some people get it wrong.
“When they have product and they do not have the medium to promote and sell the said product. We have a lot of channels companies can explore: there are online media, also ability to market your product through one-on-one communication is anothet critical aspect which can be taken advantage of, he said.
The outgoing Chairman, Nigerian Association of Animal Health and Husbandry Technologists (NAAHHT), Oyo State Chapter, Mr Kazeem Akingboye, said  during the one-day retreat, “The theme for this year’s retreat was carefully chosen to mirror our engagements in micro, small and medium scale enterprises in the livestock industry and animal health services of the agricultural sector of our econnomy.”

Wheat Price Up By 50% As Import Falls