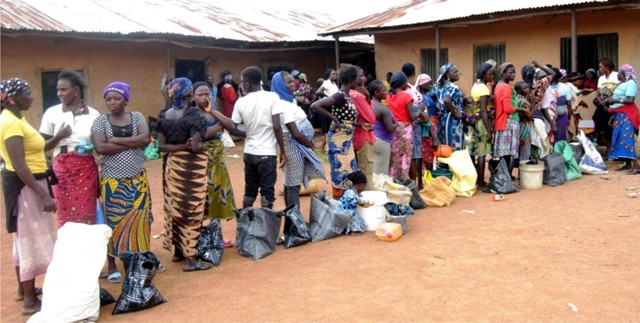 The Rivers State Government Task Force on 2022 Flood Management has distributed trucks load of food items and medical supplies to victims of flood disaster in the Orashi region.
A statement signed by the Chairman, Rivers State Government Flood Management Task Force 2022, Dr. George Nwaeke, in Port Harcourt, said that, “With the flood situation not abating, more people have been displaced.
“Worse hit communities are in Ahoada East, Ahoada West, Abua-Odual and Ogba-Egbema-Ndoni local government areas”.
Nwaeke said that the water level has continued to rise, forcing people out of their communities.
“Trucks load of relief materials were conveyed to the camps where they handed over, each camp getting its share, expected to provide immediate succour to the people”, he said.
Nwaeke had delivered the relief items to the camps that house flood victims from Ahoada West and Ahoada East local government areas.
Their various council chairmen were present, including the Deputy Speaker of the Rivers State House of Assembly, Rt. Hon. Edison Ehie.
Nwaeke, who is also the permanent secretary, Special Services Bureau in the Office of the Secretary to the Rivers State Government, assured the inmates of the best support they can be offered to cushion their sufferings.
The task force chairman said what had been brought include food items, drugs and the mobile clinic.
He told the victims that the committee would set up of sick bay in each camp to would cater to the immediate health needs of everybody in the camp.
Nwaeke explained that there would be sanitary officers posited to each camp.
The sanitary officers, he explained, would work on shift basis daily to help ensure that the camps had the best sanitary conditions to forestall any outbreak of diseases.
Nwaeke urged the coordinators of the various IDP camps to ensure that the inmates live healthy communal life.
They should also endeavour to make everybody get the relief materials, he advised.
“Of importance is the issue of security of each person in the camp,” he said.
He directed for proper documentation of inmates so that infiltrators would be identified and apprehended.
Nwaeke also said, “To the Glory of God, a pregnant woman was delivered of a set of twin right inside the Ahoada Camp 1 last night with the help of medical team of the flood committee.
“The chairman of the team presented a cash gift and directed for the immediate relocation of mother and her children to a better government health facility for better medical attention with all bills on the Rivers state Government Flood Committee.
“The overjoyed 21 years old mother could not hold back her excitement”.
Nwaeke stated that this was the beginning of what the state government was going to do for its people, adding that the government would stop at nothing to restore hope to the people.
In his remarks, Deputy Speaker of Rivers State House of Assembly, HonEdisionEhie, said they were grateful to Governor NyesomWike for his leadership and love in sending relief materials that would provide succour to the people.
On his part, Chairman of Ahoada East Local Government, Hon Ben Eke assured that, as a council, they would be upbeat in securing the camps and make life bearable for the inmates.
Internally displaced persons in the Ahoada East Camp I and II in Ahoada town and Ihuike Primary School along East-West Road, respectively, benefitted from the paliatives.
Items given the victims ranged from bags of rice, bags of garri, tubers of yam, cartons of pasta, cartons of tomatoes and other cooking ingredients and items.
The Ihuike, Ahoada camp houses majorly, flood victims from Ahoada West.
This is largely because Ahoada West is completely submerged.
Also visited was an IDP camp right inside the Community Secondary School, Upata 1, Edeoha.
A quantum of food items were also presented to the victims in the camp.
Recall that the four Orashi LGAs are adversely affected by the flood, and her people completely displaced from their ancestral homes.