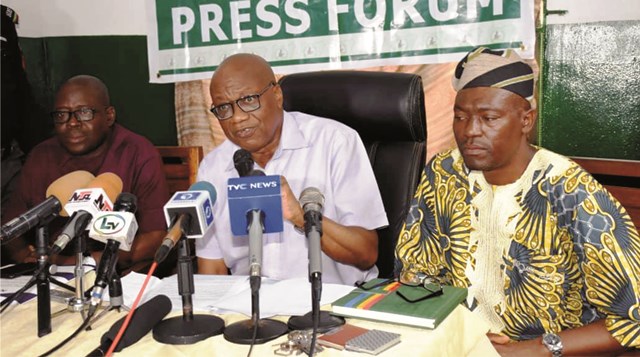 Some international election observers have expressed concern over the ability of the  Independent National Electoral Commission’s  (INEC) technology to perform optimally in the 2023 General Elections.
The joint delegation of the International Republican Institute (IRI) and the National Democratic Institute (NDI), raised the concern on Friday while addressing a press conference in Abuja.
The five-member delegation comprises the Secretary of State for Ohio, Frank LaRose; a former Minority Leader of the Sierra Leone Parliament, Bernadette Lahai; a former Director of Elections, Registration and Demarcation at the Electoral Commission of Ghana, Albert Kofi-Arhin; a Regional Director of NDI, Christopher Fomunyoh and Jenai Cox, Regional Deputy Director for Africa at IRI.
Members of the delegation took turns to read sections of the joint statement of their first pre-election assessment mission in Nigeria to journalists expressed concerns over whether the INEC Result Viewing Portal (IReV) and Bimodal Voter Accreditation System (BVAS) will perform at the same level as witnessed in the recent governorship elections in Ekiti and Osun “when scaled up for the national elections.”
While noting other concerns to be addressed ahead of the 2023 polls, the delegation said the elimination of voting points by INEC has aided the transparency of results but has also posed a new challenge for the electorates.
“Instead of transitioning the previous voting points into new polling units, INEC has largely established the new polling units in new locations. Recognizing that moving voters to a new location presents a challenge, INEC has plans only to include new voters or voters who choose to transfer their registration at these new polling units. This approach is unlikely to address the anomaly of overcrowding in existing polling units,” a member of the delegation, Ms Lahai, noted.
She said there is a need to further reduce access to polling units so as to reduce conditions for nefarious behaviours during the voting exercise.
She also highlighted inter-party disputes, insecurity, high nomination fees by political parties, election violence and low representation of women in positions of power among the issues Nigeria needs to address before the 2023 election.
In its recommendations read by Ms Cox, the NDI/IRI delegation called for timely disbursement of funding for INEC, so they can play their role in the election cycle without fear or favour.
The delegation also advised INEC to capitalise on the excitement of Nigerians from the just concluded governorship elections in Ekiti and Osun States and extend the period for voter registration.
“INEC should publish disaggregated data on registered persons with disabilities (PWDs) before elections and invest in collecting data to map the location and type of assistance needed for PWDs, and audit polling unit layouts to ensure compliance with the INEC polling unit schematic,” Ms Cox said.
The delegation also urged the commission to seize the renewed interest of Nigerians in the electoral process to engage them on issues that matter to them.
It said the country, for the first time since 2007, may witness an open contest in the coming presidential poll.

2023: ‘Nigerians Should Focus More On Winning Democracy Than Winning Elections’