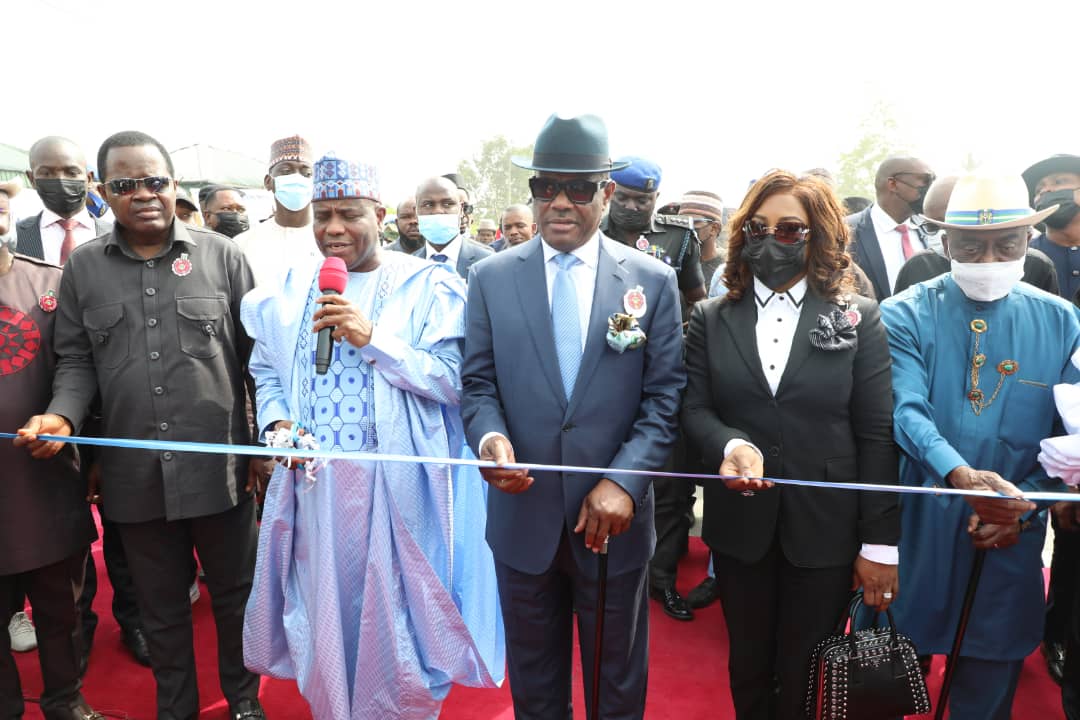 Rivers State Governor, Chief Nyesom Wike has berated the former Director General of Nigerian Maritime Administration and Safety Agency (NIMASA), Dr Dakuku Peterside for speaking about Rivers economy from the point of ignorance.
The governor wondered why Peterside, with his educational attainment, would say that merely because the budget figures of Lagos and Akwa Ibom states are higher, compared to Rivers’ budget, it means that Rivers economy was performing poorly.
He said if a man, who is that ignorant, refused to be silent but comes to public discourse to display such loose grasp of the subject matter, people would question his academic status.
Wike, therefore, stated that Perterside puts a question mark on his doctoral degree, otherwise, how could he say that the performance of the economy was dependent on budgetary estimates.
“When they asked him about the budget of Rivers State, he said the mere fact that Lagos State budget is very high, the mere fact that Akwa Ibom budget is very high, and Rivers State budget is low, that means the economy is not doing well.
“A PhD holder saying that the performance of an economy is based on the size of a budget. Does that mean that Cross River that had a budget of N1.3trillion has performed more than every other state economy?”
Wike also decried the low level of understanding showed by Peterside when he claimed that there was no governance in Rivers State.
The governor queried Perterside’s understanding of governance, saying that he served in the last administration when all the courts in Rivers State were shut for two years, and they also failed to deliver the Opobo Road to enable Opobo people drive on road to their country home.
“They asked him about governance, he said there is no governance in Rivers State. I agree with him. There was governance when the courts were shut down. You are aware that the courts were shut down for almost two years. There was governance at that time.
“There was governance when there was no road to Opobo. There was governance when they put bill one to rob Rivers State. You award a job of N7billion, in bill one is N4.5billion. Now, there is no governance because bill one has been removed? Now, there is no governance because you can drive to Opobo? Now, there is no governance because you can go to the court to seek for your right?”
Wike also took a swipe on a factional chairman of the All Progressives Congress (APC), who is traditionally cursed, and hardly could write his name, to dare challenge him for criticising the Federal Government’s economic stimulation programmes.
The Rivers State governor asserted that with the level of infrastructure and other inclusive policies of government towards Ahoada communities, nobody would say his administration has failed the Ekpeye people.
Wike enumerated some of the projects delivered, particularly in Ahoada-West to include, the Ibiama-Okarki Road, 10km internal roads in Odiokwu community, water scheme, health centre, and recognition of five first class traditional stools.
The governor said 100percent of the contract sum for the reconstruction of Government Secondary School, Okarki, was released to some of their sons, but they diverted the money.
He, however, promised not to be deterred by their act but to revisit the project and ensure that it was competed.
Wike said it was important that they resolve their problems over the selection and choice of a new Eze Ekpeye Logbo.
He urged them to complete that process within the next two months, and endorse a person who would not sell out Ekpeye’s interest or go to companies to take what was meant for the entire Ekpeye people, and present same to the state government.
Wike also directed the demolition of structures for which compensation has been paid, to enable the contractor commence work on the dualisation of the first phase of the Ahaoda-Omoku Road project.
Inaugurating the 10km internal roads, Sokoto State Governor, Hon. Aminu Tambuwal noted that he was witnessing a success story of infrastructural development in a rural Odiokwu community whose socio-economic life has been revived.
He said that despite the lack of capacity of the Federal Government to deliver good governance, they, the governors, were doing their utmost best, playing their role to keep Nigeria together.
Tambuwal said they were proud of Wike for strengthening the existing relationship between Rivers and Sokoto states.
Walking in the footsteps of Melford Okilo and Shehu Shagari, Tambuwal stated that he was working with Wike to foster national unity, cohesion, survival of their people.
Providing a description of the project, Special Adviser to Governor Wike on Special Projects, Dax Kelly Alabo said the 10km network of internal roads have 20km of drains on both sides.
He assured that the roads, built to last 40 years, would impact positively on the socio-economic dynamics of the community.
This is because the crisscross nature of the roads has made access in and out of the farms easy, he said.