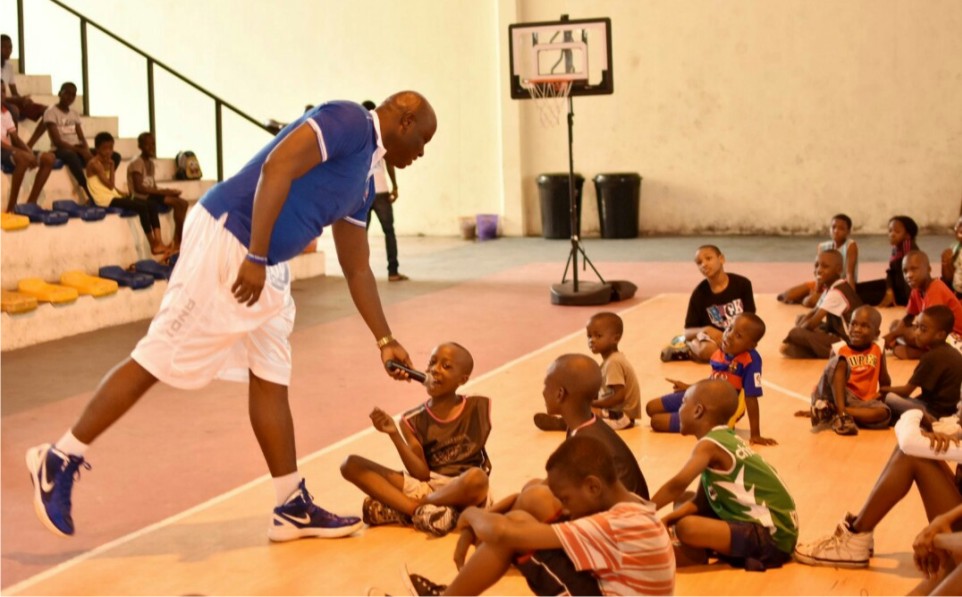 The Coordinator of DA-F basketball programme in Port Harcourt, Coach Fubara Onyanabo, says the  first edition of the just concluded Youth Basketball Festival tagged, “The Future Of Naija Basketball”  was impressive and successful
He revealed that the essence of the tournament is to pip into the future of Nigeria basketball, adding that in the next five to ten years some of the players who participated in the tournament would  be at the peak of the game.
Coach Onyanabo said this last Saturday in a chat with Tidesports at the basketball court Niger/Bende in  Streets  Old Port Harcourt township.
He disclosed that 38 teams and over 400 children and teenagers    participated in the competition, saying that the organisers close registration apromptly to avoid over crowding.
“It had been wonderful and impressive tournament as we catch a lot of fun.
“In fact because of logistics problem we have to cut down number of teams that wanted to participate, initially we wanted 40 teams, ten in  each category but because of logistics we cut it down to 38 teams.
The tournament was tagged “Future Of Naija Basketball” because is like piping  to future of Nigeria basketball in the next five to ten years coming these players are going be stars  in the country” Coach Onyanabo stated.
According to him, he is not sure they have been such a huge turnout in a local Basketball competition in  the  history of Nigeria.
“ The turn out of the competition was massive, it has been fun throughout the tournament,” he said.

The Tide
Nigeria has made a U-turn over its decision last month to withdraw from international basketball for the next two years.
At the time, the Ministry of Youth and Sports said the withdrawal was because of “the unending drama that have plagued and nearly crippled basketball” in the country.
It argued that the decision, which was approved by President Muhammadu Buhari, would enable the country to “revamp” the sport from grassroots level and revive “moribund” domestic leagues.
The reversal comes after talks between officials from the sport’s world governing body, FIBA, and Nigeria’s Minister of Youth and Sports, Sunday Dare.
A letter from the FIBA-recognised Nigeria Basketball Federation (NBBF) President, Musa Kida outlining key changes, which could be made, also helped prompt the government’s change in position.
The move means Nigeria men’s team will be able to continue in the qualifying campaign for the 2023 World Cup in Rwanda next month, where they will play Mali, Uganda and Cape Verde.
D’Tigers are top of the group on points difference after the first round of games last November, with the top three in the pool advancing to the second round of qualifying which is set to begin in August.
However, the announcement comes too late for the women’s national team to be reinstated into this year’s Women’s World Cup.
Earlier this month FIBA took the decision to replace Nigeria with Mali at the tournament, which will be held in Australia in September and October.
The decision to pull out of global basketball had been met with dismay by players and officials in Nigeria, and also abroad.
Women’s international Upe Atosu described it as “heart-wrenching” while Masai Ujiri, a Nigerian-Canadian who is president of NBA side Toronto Raptors, criticised NBBF officials.
According to the Ministry of Youth and Sports, its meeting with FIBA produced “common understanding in certain areas”.
It added that both FIBA and Nigeria had made a commitment “to explore and collaborate on enhancing relationships, development of basketball and reaffirmed mutual respect for the laws and constitution of Nigeria as a sovereign state”.
The letter from NBBF president Kida said the organisation would set up a team to “reconcile all contending parties in the basketball family at home and abroad”.
Ultimately, President Buhari was again consulted and approved the return.”President Muhammadu Buhari, being one that is committed to youth development and desirous of ensuring that they are availed of all opportunities in sports and other endeavours considered the appeal,” a statement from the Ministry of Youth and Sports said.
“In the overriding spirit of national interest, love for our youth, and in order to avoid sending basketball development into a long period of suspension, when NBBF have now committed to resolution of the issues which precipitated the withdrawal in the first place, has approved the return of Nigeria to international basketball immediately.”
The sport in Nigeria has been blighted by a protracted leadership crisis following a controversial election six years ago, leaving two parallel boards laying claim to the leadership of the federation.
The battle for control of Nigerian basketball has often hampered preparations for international competitions and crippled the country’s domestic leagues.
Kida was re-elected as NBBF president in January, a result which was ratified by Fiba in March.

Nigeria Others Battle For Relay Tickets In Benin

The Tide
Four African countries, Ghana, Botswana, Togo and the Benin Republic are expected to participate in the relay events, as the national trials organised by the Athletics Federation of Nigeria (AFN) to select athletes for Oregon 2022 World Championships and the Commonwealth Games in England begins in Benin City tomorrow.
Tidesports learnt that only the Nigerian women’s 4x100m and the mixed relay teams have qualified for Oregon 2022, while the men’s 4x100m and 4x400m relay teams were yet to qualify as well as the women’s 4x400m relay team.
An official hinted that the Nigerian women’s 4x100m and the mixed relay teams also need to improve on their current ranking to guarantee qualification, as the country is currently ranked 16th in both events, which means the nation is occupying the last qualification spot.
According to an AFN official, the four countries, Ghana, Botswana, Togo and the Benin Republic want to use the AFN’s National Trials in Benin City to strengthen their relay squads.
“We are expecting these four countries to arrive in Lagos today (yesterday). Maybe, one or two more countries may join us on Friday,” the official stated.
Meanwhile, reigning African Games 100m champion, Raymond Ekevwo and reigning World U20 Athletics Championships 200m kings, Udodi Onwuzurike, will be among the six top ranked athletes that will seek to be in the national team for the first time at the 2022 Nigerian Athletics Championships in Benin.
Ekevwo and Onwuzurike will go head-to-head in the short sprint, with the latter on top of the Nigerian 100m list with the 10.03seconds he ran early this month.
Onwuzurike will participate in his first National Championships and will also be gunning for the 200m title, where he stands as the overwhelming favourite.
Also aiming for their first titles are sprinters Favour Ashe, Alaba Akintola and Rosemary Chukwuma.
Ashe holds a personal season’s best of 10.04s in the 100m and won a silver medal in the event at the 2022 NCAA outdoor championships early this month in Eugene, Oregon, U.S.
Akintola, the reigning National Sports Festival 200m champion, will also be bidding for his first title in the history of the Nigerian championships.
Like Ashe and Ekevwo, Akintola also holds a personal season’s best of 10.04 seconds achieved this year.
Chukwuma, the African Youth Games and African U20 double sprint champion is also seeking her first national title in the sprint event. With the confirmed absence of Favour Ofili, Chukwuma will have Tokyo Olympics semifinalist, Grace Nwokocha, compete in both the 100m and 200m events. Nwokocha is the defending champion in the half-lap race.
Also waiting to mount the podium as national champion is 400m barrier runner, Ezekiel Nathaniel, who ran 48.42 seconds last month to break Henry Amike’s 35-year-old record in the 400m hurdles. The athlete, who turned 19 on Tuesday, is waiting to be crowned Nigerian champion for the first time.
Home girl, Tima Godbless, will also be dreaming of upstaging the U.S.-based duo of Chukwuma and Nwokocha after improving from the 11.48 seconds achieved last year to 11.25 seconds in the 100m event at the 22nd African Athletics Championships in Mauritius about a week ago.

…Plumptre, Others Join Camp In Abuja

The Tide
The trio of Ashleigh Plumptre, Francisca Ordega and Halimat Ayinde have arrived at the Super Falcons Abuja camp ahead of next month’s African Women Cup of Nations, Tidesports source reports.
The arrival of the three players was announced on the Falcons’ verified Twitter handle earlier in the week.
Following the latest arrivals, the number of players in the Falcons camp now totals 28.
Falcons head coach Randy Waldrum, will select the 23-woman squad that would be in Morocco for the WAFCON from the 28 currently in Abuja.
The Falcons will take on Banyana Banyana of South Africa, WAFCON debutants Botswana and Burundi in Group C.
The nine-time African champions will begin the defence of their title against South Africa on July 4 in Rabat.
Meanwhile, the 2022 WAFCON will serve as qualifiers for the 2023 World Cup to be co-hosted by Australia and New Zealand as all four semi-finalists are guaranteed qualification.