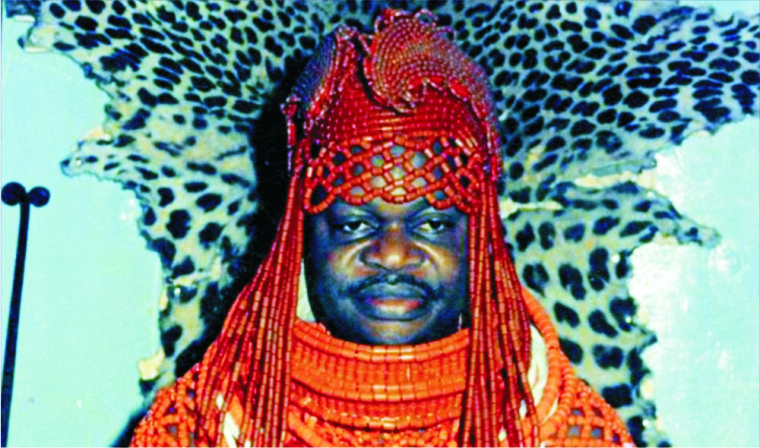 A group under the aegis of Ekpeye Oil and Gas (EOG), has identified with Eze Igbu Akoh II, Eze Cassidy Ikegbidhi as a dependable traditional ruler who champions the course of youths in Ekpeye land.
EOG stated this at a solidarity visit to Eze Ikegbidhi at his palace in Ihugbogo Community in Ahoada East Local Government Area of Rivers State, recently.
Addressing newsmen, shortly after the presentation, Ikegbidhi who expressed gratitude at the all important visit said, he was much delighted at any venture that could fetch job opportunity to the unemployed youths.
The two-time former Ahoada East council boss decried the backwardness in Ekpeye nation, attributing it to the lack of love among themselves.
Ikegbidhi admitted the fact that people twisted the formation of EOG for selfish reason said: “but what I can see and hear today is far from what they rumoured, I am not the type of Eze that will go to company to drink tea, but company will find me at my palace.”
The monarch, while advising the group to show maximum support to the administration of Governor Nyesom Wike, warned against pipeline vandalism in their operation in Ekpeyeland.
He urged the executive officers not only to carry everybody along in the scheme of things, also to include non oil and gas producing communities; noting that the name EOG cut across the towns and villages in Ekpeye kingdom.
The highly elated monarch donated one goat, five tubers of yam, one bunch of plantain and assorted cartons of drinks among other edibles.
Earlier in his solidarity speech, National Chairman of EOG, Hon Chidi Dogini congratulated Eze Ikegbidhi on his court victory.
Dogini thanked the Ekpeye first class chief for his contribution to his present status, noting that Eze Ikegbidhi has touched the lives of many people, especially when he was council chairman.
“As Ikegbidhi ascends to the throne of Eze Igbu Akoh, Ekpeye kingdom will be better,” Dogini stated.
The chairman told the mammoth crowd that the idea to form the EOG association stemmed from when he was special assistant to Ikegbidhi when he (Ikegbidhi) was the Ahoada East Local Government chairman.
He maintained that EOG was constituted to enable member communities press home their rights from the several multinational oil companies in Ekpeyeland, adding that the body was duly registered; promising that its functions would not overlap with that of the landlords.
Also speaking, EOG Public Relations Officer (PRO), Amb. Ijeoma Austin Okpara said, the visit was predicated on showing support to the revered monarch; noting that all the villages that bear oil and gas were present.
However, in a vote of thanks, Chief Moses Justice thanked EOG for their wisdom, and prayed God for divine guidance.

A renowned activist in Rivers State and Niger Delta stakeholder, Rev (Dr) Sokari Soberedon, has applauded the first Military Governor of old Rivers State, King Alfred Diete-Spiff for recently celebrating his 80th birthday anniversary, describing him as an astute administrator and consummate leader, who laid a solid foundation for the development of old Rivers State.
Soberekon, who made the commendation in Port Harcourt lauded Diete –Spiff for clocking the ripe age of 80 years, and thanked God for preserving his life.
He recalled that as a good team player, Diete –Spiff had given him listening ears, when they sat down together in far away Lagos to plan for the development of the young state, as soon as he was appointed the Military Governor by General Yakubu Gowon ( rtd) shortly after the state was created in 1967.
While lauding the giant development strides of the Diete-Spiff administration, Soberekon said the former Military Governor exhibited uncommon foresight and forthrightness in putting on ground some of the monumental infrastructures for the smooth take –off of the young state which, he noted have stood the test of time, having endured till this day.
The Niger Delta activist, who would also be celebrating his 80th birthday on September 24, 2022, commended Governor Nyesom Wike for following in footsteps of Diete-Spiff in further taking Rivers State to greater heights, and appealed to him to assist him have a wonderful and memorable birthday celebration by giving him the needed financial support, as one of the living founding fathers of the state and renowned exponent of the oil derivation principle.

The Rotary Club of Port Harcourt District 9141 has installed Rotarian Obiageli Ejezie as its 50th president.
The ceremony which took place at the Rotary Centre, Trans Amadi, Port Harcourt, was attended by people from all walks of life.
Speaking shortly after her installation, Rotarian Ejezie listed out some programmes the club intends to pursue within the next rotary year.
Among programmes listed include maternal and child health basic education and literacy as well as water and sanitation.
Rotarian Ejezie also said the club would embarked on disease prevention and treatment, economic empowerment and community development as well as peace and conflict resolution.
She said the club would target projects that will impact positively on the lives of the people, saying the programmes are meant to affect lives positively and bring lasting change in the society.
Also speaking, the immediate past president of the club, Rotarian Mike Ezeanya, said his administration impacted on seven areas within the last Rotary year.
Ezeanya listed the achievements of the club in the last Rotary year to include donation of medical equipment and consumable drugs to the primary healthcare centre in Port Harcourt, donation and provision of desks, tables, textbooks, notebooks and learning aids to two primary schools and provision of hygiene facilities.
Other achievements, according to him, are free eye treatment and diagnoses test to over 150 public transport drivers, micro credit empowerment to 50 market women with grants and loans, financial rewards and recognition to encourage public school teachers, rewards of excellence to public school students, civic child acquisition, creation of awareness in market places and free planting campaign.
Ezeanya commended the Rivers State Governor, Chief Nyesom Wike, for the rehabilitation of the Rotary Centre road and also thanked members for their support.

The Paramount Ruler of Rumuokwurusi, Eze Simeon Wokoma, has reiterated his initial stance to maintain peace and strengthen the strings of conflict resolution mechanism in his community.
Wokoma said this when he received the award of the ‘Outstanding Monarch On Peace Maintenance/Conflict Resolution of The Year 2022’ by the leadership of Coalition of Niger Delta Journalists at his palace in Rumuokwurusi in Obio/Akpor Local Government Area recently.
Wokoma, a Knight of the Anglican communion, said his insistence on promotion of peace was to invoke even development in the area.
According to him, no human environment has witnessed any form of growth amidst crisis and conflict.
Not dismissing the possibilities of conflict among the people, he said the most important thing was to ensure that no disagreement in the Community snowballs into major crisis.
He noted that such must be achieved through a regular meeting with all classes of people in the Community with a view to knowing their challenges and providing solutions to same.
“As a Paramount ruler, my concern is to have a peaceful reign. As a man of peace, I will be bothered, if my people are not enjoying peace, that is why I stand for peace and conflict resolution”, he said.
The Rumuokwurusi King alsoelugized the Rivers State Governor, NyesomWike, over his determination to give the State a permanent facelift.
He spoke on the backdrop of the Rumuokwurusi flyover construction and other sundry works in the State and added that he has the growth and development of Rivers people at heart.
Meanwhile, he has appreciated the team for the honour done him and promised to do his best in activities that can lead to the betterment of journalists in the State.
Earlier in his address, the leader of the Team, Mr. WarisoWariso, said the Eze was chosen due to what he called “his undiluted concern for promotion of peace in his community and beyond”.
He chronicled how their host solely empowered indigent people in his Kingdom, noting that “there was no better way to honour such a man than what we have done”.