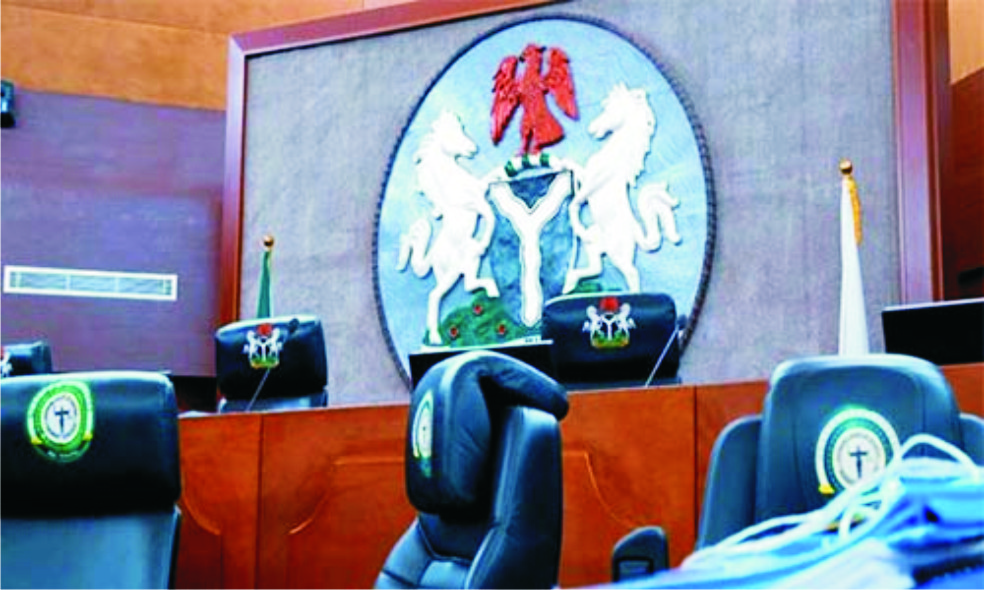 The Supreme Court yesterday fixed Aug. 31 to deliver judgment in the appeal brought before it by the governorship candidate of the Peoples Democratic Party (PDP), Musa Wada and his party.
Wada and PDP are challenging the re-election of Governor Yahaya Bello of the All Progressive Congress (APC) in the November 16, 2019 governorship election.
The seven man panel of justices of the apex court led by the Chief Justice of Nigeria (CJN), Tanko Muhammad yesterday fixed the date after parties in the appeal adopted their various written briefs.
The Kogi Governorship Election Petition Tribunal and the Court of Appeal had in concurrent judgment affirmed Yahaya Bello’s re-election on the grounds that Wada and his party failed to prove the allegations of electoral malpractices in their petition.
Dissatisfied with the two judgments of the lower courts Wada moved to the supreme court for the setting aside of the concurrent judgments of the tribunal and that of the Court of Appeal.
He wants the apex court to set aside the judgments of the appellate court on the grounds that the Court of Appeal discarded evidence of rigging and violence in seven local government areas of the state.
The Independent National Electoral Commission (INEC) he spread threshold in the election.declared Bello, candidate of the All Progressives Congress (APC), as the winner of the governorship poll, having won majority of votes cast and the spread threshold in the election.
However, four contestants and their parties, including Wada and the PDP, had disagreed with INEC and subsequently approached the Kogi State Election Petitions Tribunal to challenge the victory of Bello.
The other petitioners are the Actions People’s Party (APP); the Social Democratic Party (SDP) and the Democratic People’s Party (DPP).
However, their petitions were all dismissed by the tribunal for lacking in merit.
Similarly, the Court of Appeal agreed that the cases of the appellants lacked merit and even dismissed some with cost against some appellants.
The Court of Appeal had in its judgment held that the allegations of over-voting, multiple thumb-printing, and results falsification were not proved by the appellants.
In the split ruling delivered by Justice Haruna Tsamani, the appellate court held that the appellants merely dumped documents on the tribunal without calling relevant witnesses to link the documents to the allegation of over-voting.

Former Secretary to the Government of the Federation, Mr. David Babachir Lawal and former Speaker, House of Representatives, Yakubu Dogara, have been called upon not to drag the Christian Association of Nigeria (CAN) into their dispute as this will negate the principles of CAN in maintaining peace in Nigeria.
The call was made by the Plateau State Commissioner for Lands, Survey and Town Planning, Mr. Yakubu Dati, in a statement to newsmen.
Dati said the duo were creating division among Christians with CAN, which seemed to support their antics since the All Progressives Congress (APC) Presidential Candidate, Bola Ahmed Tinubu, chose former Governor of Borno State, Senator Kashim Shettima as his Vice Presidential Candidate.
“But it is now an open secret that the position of CAN, may have been influenced by the duo, purely out of vendetta against the APC presidential candidate, for not looking their way to pick his running mate,” Dati alleged.
The Commissioner emphasised that CAN was established to make peace reign in the country by settling ethnic and religious crisis in the country and it has efficiently carried out this responsibilities over the years.
He noted that since CAN has elected a new leadership to steer its affairs, it is pertinent to offer the body a word or two of advice to save it from being used by politicians to achieve their selfish aims, more so “as we are on the cusp of another political season.”
“It is no longer news that immediately after the APC presidential candidate, Asiwaju Bola Ahmed Tinubu picked former Governor of Borno State, Senator Kashim Shettima as his running mate, that CAN took a position on the matter siding with certain APC members, especially former Secretary to the Government of the Federation, Mr. David Babachir Lawal and former Speaker, House of Representatives, Yakubu Dogara who lost out in the quest to be appointed running mate to Tinubu, to reject the ticket.
“They forget that it was Asiwaju Tinubu who nominated David Babachir Lawal as Secretary to the Government of the Buhari administration as a mark of respect for the Adamawa born politician. Left for Tinubu who was then one of the national leaders of the APC, Babachir would have continued in office and probably even retained the position in the second tenure of the Buhari administration like his kinsman, Boss Mustapha has done, but for the notorious “grass cutting” controversy that eased him out of the government,” he said.
Dati also noted that notwithstanding this, “the Jagaba of Borgu, in an attempt to rehabilitate the sacked former SGF, gave him the responsibility of shortlisting possible vice presidential candidates for him.
“But even that simple task was twisted to favour certain parochial interests. Babachir recommended the Northeast and Northwest for the position to the detriment of the North Central geopolitical zone, which is the hub of Christianity in the Northern Nigeria.”
The Commissioner explained that this ostensibly, was to foreclose the consideration of Plateau State, which paraded the only Christian Governor of APC in Northern Nigeria.
“Interestingly, the Babachir committee recommended Senator Kashim Shetima as tops on their list and the APC Presidential candidate, Asiwaju Bola Tinubu, simply acted on it. When confronted with these facts on national television, Babachir confirmed it, stating however that it was a draft!
“As evidence that Babachir was not sincere in his recommendation, he immediately took advantage of the religious fault lines together with Dogara, the other aggrieved VP hopeful who lost out, ignited the Muslim- Muslim controversy and unwittingly recruited CAN into the fray,” Dati alleged.
He also said that there was no way Tinubu would have picked either Babachir Lawal who hails from Adamawa State or Yakubu Dogara from Bauchi State because of the implications to his electoral fortune, adding that Adamawa where Babachir hails from and Bauchi, Dogara’s home state are both PDP controlled States.
Both men, in spite of their positions and enormous resources at their disposal, have consistently failed to deliver their respective states to the APC. “This is unlike Tinubu who always delivers”, he said.
“Due to the hullabaloo generated by the duo of Babachir and Dogara, the Asiwaju has gone ahead to pick Simon Lalong, the Governor of Plateau State and Chairman of Northern Governors Forum to lead his campaign as the Director General.
“This choice is based on Gov Lalong’s enviable track record of fairness regardless of tribe, religion or creed. His excellent management of men and resources resulting in the restoration of relative peace in the once restive Plateau State has projected him to national limelight.
“As a Knight of the Catholic faith, Gov Simon Lalong also resonates with the northern Christians whose fears have been allayed. Those trying to rock the boat by insinuating that his appointment is an attempt to ridicule Christians were the same lot that campaign vigorously against Christians candidates, including an ordained pastor, at the APC primaries.
“The APC northern Christians are now energized, more than ever before, to pour themselves into the campaign,” the Commissioner said.
He also explained that religious bodies should be accommodating to all adherents without allowing themselves to be led by the nose by those who remember the association only when their selfish interests are at stake.
“Religious leaders should be wary of being reduced to lap dogs of politicians. This is the real challenge before the new leadership of CAN,” he advised.

The Senator representing Enugu East in the National Assembly, Senator Chimaroke Nnamani, has again cautioned his constituents against succumbing to antics of supporters of the Presidential candidate of Labour Party, Mr. Peter Obi, otherwise called Obidients.
He charged his supporters not to bow to pressure to vote for Obi based on sentiments.
Nnamani enjoined his supporters to remain steadfast with the Peoples Democratic Party (PDP), and its candidate Atiku Abubakar and all other PDP candidates in order to restore hope and emancipate the people from deprivation.
The federal law maker said this in a statement he signed in Abuja, on Monday.
Nnamani cautioned against “Greek gifts” from the Obidients canvassers as that would negatively affect the Peoples Democratic Party (PDP) chances to produce state Governors, Senators, members of the House of Representatives and state House of Assembly.
The Senator likened the Obidients movement to the story of the Tortoise who borrowed feathers from other animals to enable him fly to attend a feast only to appropriate what belongs to everyone to himself alone, claiming to be everybody .
He said, “ That is exactly what they want. To borrow from every body and turn round to appropriate everything .
“Do not give them your feathers, let them Stay on the ground where they belong. Your feathers are the structures they need. Call their bluff.
“ Our party and platform is PDP. We must stand firm. We must not be swayed by the Obidient sentiments and vote Labour Party . If we blur the distinction , it will be difficult to reverse .
He further said, “ remember these Obidients advocates are noisy , loud , intolerant, proselytizers, condescending but less than 0.25 percent of over 200million Nigerian population. At least Osun state 2000 votes for Labour Party bears it out.
“ Why should we establish foundation and beech head for others . We cannot allow Obidients to inherit our labour in the PDP .
“In battle , do you give invaders your beech head to land and now seek to drive them away .
“We have to be on the alert because they are luring us into false sense of complacency using subterfuge.”
He explained that the boundaries are clear, so also the differences , “we are Ebeano and our political party is PDP, our symbol is umbrella not Labour Party