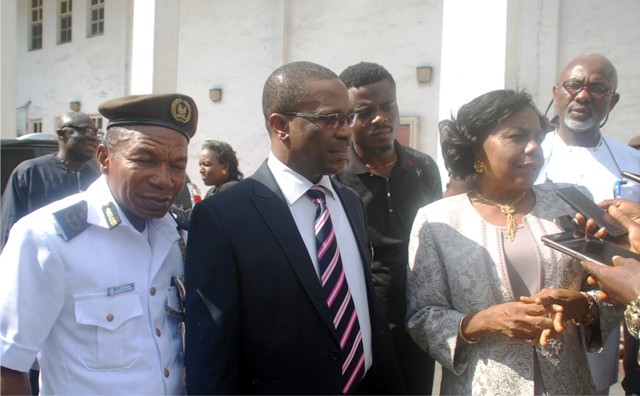 Table water producers in Rivers State have lamented the imposition of special levy by the the Bayelsa State Government on water coming into the state from Rivers State.
Chairman of the Association of Table Waters Producers of Nigeria (ATWAP), Rivers State, Mr. Eyberi Odiri Mackson who said this in an exclusive interview with The Tide in Port Harcourt claimed that the Bayelsa State Government has imposed a levy of N200 per bag of water coming into the state from Rivers State.
He also claimed that members can nolonger assess Okarki, a community in Ahoada West Local Government Area to supply water to them.
“We can nolonger access Okarki and other communities within the area to supply water to them, while water from Bayelsa State is now flooding Omoku Mbiama and Ahoada”.
He said that the association has already petitioned the Bayelsa State Government and the State House of Assembly on the issue, while the Rivers State Government has also been notified on the issue.
He said that time has come for the Rivers State Government to look into the matter with a view to ensuring that the association gets water across to Okarki and other communities in Ahoada West Local Government Area which are part of Rivers State.
Meanwhile, Mr. Mackson has alleged that the involvement of foreigners in the waters sector of the country is capable of denying millions of employment opportunities in the sector.
Speaking in an exclusive interview with The Tide in Port Harcourt, he also said the situation has put the lives of Nigerian at risk.
He said the situation has underscored the need for government to implement the local content policy in the water sector.
The ATWAP chairman said that Nigerians have the capacity to produce water for the country’s teeming population.
He also said that the association has organized series of trainings for its members with a view to improving their capacities.
ATWAP he said is also worried over the proliferation of illegal water factories across the state, stressing that they are already collaborating with the security agencies to shut down these illegal factories.

‘Continous Dredging Of Otamiri River May Cause Environmental Disaster’

Bayelsa is one of the states in the country that is prone to flooding.
The state which is located in the heart of the Niger Delta Region of Nigeria has a low land and marshy environment.
Moreover, the state has several creeks running from the Rivers Niger and Benue to the sea.
Bayelsa is always affected by any increase in water level in Rivers Niger and Benue.
In the 2012, flooding, half of the state was submerged by water and even the capital Yenagoa was not spared.
Water covered the entire road in the capital city including the road leading to the government house.
Also in that year, some communities were also affected.
Some of these communities are: Egwe-Ama in Brass Local Government. Otubhi in Ogbia, Edwarie in Southern Ijaw and Trofani.
Adagbabiri, Odonni Anibeze and Asamabiri in Sagbama Council Area.
The rest are: Kaiama, and Sampou in Kolokuma/Opokuma Local Government Area.
As at the last count, more than 20 communities were affected.
In Obagene and Okututulu towns residents were forced to vacate their homes business and schools were shut down.
The surprising thing is that since the incident, there has been no effort by both the state and federal governments to find solutions to the problem.
In 2013 and subsequent years that followed, residents also vacated their homes.
For how long will this continue?
Already, some residents of the state are beginning to be agitated over the possibility of having to vacate homes this year, 2022.
Some of them raised concern in an interview.
According to some of them, whenever flooding occures there are many risks associated with it .Take for instance, the issue of snakes and other reptiles that searched for higher ground to stay until the water is obated.
There are also rodents that invade houses because every where is flooded.
“We need help but no one seems to care. We have resorted to moving some of our valuables to neighbours houses because there are no shelter provided by the government.
Another residents who spoke under anonymity said they normally used dugout canoes to access their houses during period of flooding.
It is on this note that I called on government to do something urgently about the situation.

Edo State Governor, Mr Godwin Obaseki, has said his administration will intensify work on intervention programmes to check the menace of gully erosion as part of efforts to alleviate the sufferings of residents in erosion-prone communities in the state.
The governor told journalists after inspecting gully erosion sites in Ogiso Quarters and Urora in Ikpoba-Okha Local Government Area of the state, that his administration started addressing the flood challenges in the areas because before now, the places were devastated after a rainstorm.
He said: “For us, it is about rebuilding our communities and improving the lives of our citizens. You can imagine the span of this drainage system with over 50 hectares of land and property which has now enhanced their values.
“I believe this is what development is all about. This is how communities and citizens are being supported. But let us not forget that all these would not have happened without the assistance of the World Bank under the Nigeria Erosion and Watershed Management Project.”
“The purpose of this visit is to confirm that the underground drainage work has been properly completed and the next logical step is to make sure that the road network is covered and the communities have the full benefits that come with this project.”
He added, “This project is not a fancy one. We need to invest in the environment so that we can protect people’s property and livelihoods.”

Governor Okezie Ikpeazu of Abia State, has sacked the Deputy General Manager of Abia State Environmental Protection Agency (ASEPA) Aba, Chief Rowland Nwakanma.
The Governor also approved the immediate removal of all local government waste management zonal heads in Aba except Aba Owerri road, Ikot Ekpene road and express.
This was announced in a release signed by the Secretary to the State Government (SSG), Barrister Chris Ezem and made available to The Tide source last Thursday, in Umuahia, the State capital.
No reason was adduced over their sudden removal.
However, the release by SSG stated that all the sweepers in these areas are not affected and should continue to discharge their daily duties of keeping the roads clean.
Governor Ikpeazu further directed the state commissioner for environment to take over and oversee Aba waste management and immediately advertise for the engagement of professional waste managers to handle the various zones.
The release stated, “Government will henceforth not Condone any lapses in the waste management effort in Aba and Umuahia and accordingly expect immediate evacuation of all residual wastes in all locations around the city of aba and Umuahia without any delay”.