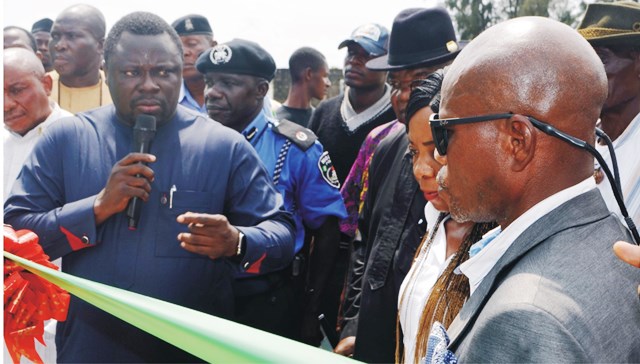 Former Nigeria Super Eagles Captain, Nwankwo Kanu, last Monday said he was embittered by the illegal takeover of one of his properties, “Hardly Apartment’’, located in Victoria Island, Lagos, which was under litigation.
Kanu told our correspondent in his Kanu Heart Foundation Office, Ikeja, that such trespass was against the court’s injunction.
The said property, Hardly Apartment, is a subject of litigation and has been under temporary possession of AMCON since 2015 over alleged indebtedness.
Kanu, fondly call “Papilo’’, said that he had been in the dark about the possession of the hotel until he went there to see for himself the latest development.
“I have chosen to obey the court ruling on the property because the court has yet to award it to anyone, but I kept on receiving reports that work is on going on the property.
“I decided to see the development on the property today myself, and I found out it is true. I cannot imagine a property that has a competent court order being trespassed.
“We need to obey the court ruling on the property. There will be a court sitting this month, but to my surprise it has been taken over before the court ruling.
“It really hurts me to see that a property under litigation and that an injunction of a court could be disregarded with work ongoing there. I am a law abiding citizen and I think people should respect that,’’ he said.
Kanu said he had paid his due to the country as a patriotic citizen right from his teen, while promising to do more under a right atmosphere.
“I want to say that people are looking up to us. The country wants us to come and invest in Nigeria which we have done, but this should not be the result we are getting.
“I so much believe in Nigeria right from my tender age when I represented the country at the age of 17 and I have remained patriotic winning several honours for the country.
“I also believe that having properties like this will create jobs for the people who are looking up to us but such investment is what some want to take away illegally and forcefully.
“As a patriotic citizen, our investment should be better protected than being taken over illegally,’’ he said.
Kanu said that proceeds from the property was one of the sources of his funding the Kanu Heart Foundation Project, but added that he had been left to rue his loss.
He appealed to the government to intervene in the matter not for himself but for the many heart patients that have yet to benefit from the treatment offered by the foundation.

The Tide
A 50-year-old man, Tunde Alabi, has appeared before a Yaba Chief Magistrates’ Court in Lagos over alleged N8.5 million land fraud.
Alabi of no fixed address, is facing a four-count charge of conspiracy, obtaining under false pretences, entry by violence and stealing.
He however, pleaded not guilty to the charge.
The prosecutor, SP Idowu Osungbure, told the court that the defendant committed the offences sometime in 2020, at Ibeju-Lekki area of Lagos.
Osungbure said the complainant, Mr Nnona Ejiofor, bought two plots of land valued at N8.5 million located at Ibeju-Lekki from the defendant who claimed it was a family land.
She said that the defendant issued a receipt of the sale to Ejiofor and he started constructing a building on the land.
The prosecutor stated that the defendant unlawfully entered the land and destroyed building materials worth N5 million belonging to the complainant.
Osungbure said that it was later discovered that the defendant was not the real owner of the land.
The offences contravened sections 411, 314 and 287 of the Criminal Laws of Lagos State, 2015 (revised) and Section 3 of the Properties Protection Law of Lagos State, 2016.
The Tide source reports that Section 314 is punishable by 15 years imprisonment for obtaining under false pretences, while 287 stipulates three years imprisonment for the offence of stealing.
The Tide source further reports that Section 3(4) of the Properties Protection Law of Lagos State, 2016 provides for 10 years imprisonment for the offence of entry by violence.
Chief Magistrate Olatunbosun Adeola admitted the defendant to bail in the sum of N500,000 with two sureties in like sum.
Adeola held that the sureties must submit copies of their National Identification Number (NIN), six months bank statements and Lagos State Residents Registration Agency (LASRRA) card.
She further directed that the sureties must reside within the court’s jurisdiction, be gainfully employed with an affidavit of means and evidence of three years tax payment to the Lagos State Government.
Adeola adjourned the case until Aug. 3 for mention.

The Tide
A 26-year-old domestic servant, Sharon Francis, was docked on Thursday at a Kaduna Chief Magistrates’ Court for allegedly stealing her employer’s jewellery and other items valued N700,000.
The defendant, who resides at Ali Akilu area of Kaduna, is facing a two-count charge of conspiracy and theft.
The prosecutor, Insp. Chidi Leo, told the court that the defendant and two others, still at large, committed the offences on May 15 at Malali, Kaduna.
He alleged that the defendant and her accomplices stole clothes, jewellery, three pieces of watches and two television sets, all worth N700,000.
According to Leo, the items belong to Mrs Esther Paul.
He said that the defendant absconded after stealing the items but was later arrested in Niger.
The alleged offences are punishable under Sections 285 and 271 of the Penal Code of Kaduna State, 2017.
The defendant, however, pleaded not guilty.
The Magistrate, Ibrahim Emmanuel, granted him bail in the sum of N200,000 with two sureties in like sum.
Emmanuel also ordered that the sureties should be blood relation of the defendant and have means of livelihood.
He added that the sureties should reside within Kaduna and show evidence of tax payment to the state government.
The magistrate adjourned the case until August 20 for hearing.