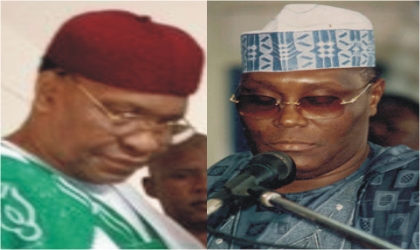 United by the misfortune of the unfortunate and painful death of President Umaru Musa Yar’Adua last month, the disturbing increase in approval of rating and public support for his successor, President Goodluck Jonathan and the North’s fear of losing the presidency to the South specifically, the long neglected Niger Delta region, by 2011, strange political bed-fellows are set for battle – a battle against the incomprehensibility of a Supreme Being, known to Islam as Allah and to Christianity as Almighty God.

That meeting was followed by another Saturday, and in attendance were five representatives from each of the three northern zones, North-East, North Central and North-West, with Babangida, Atiku and Ciroma, as arrow-heads.

The arguments against the perceived possibility of a Jonathan presidency come 2011 did not change; that Yar’Adua should have spent not more than two terms of eight years, if he had lived to indicate such interest, because the North earned the 8-year period by simply allowing former President Olusegun Obasanjo, the same number of years on behalf of the South.

That, according to them, was informed by a gentle man’s agreement which voluntarily ceded the presidency to the South, specifically to Obasanjo, after the death in prison of Chief Moshood Abiola, presumed winner of the June 12, 1993 presidential elections and the need to pacify the grieving South-West.

Laughable, but so sacrosanct is that agreement, in their estimation that they would do anything and everything to ensure that the North reclaims its prized heritage, a property they have owned for most of the nearly 50-year-post independence history of the forced federation of Nigeria.

Expectedly, the annually recycled Northern political big-wigs intend to carry their disapproval to everywhere including the National Working Committee, (NWC) and then the National Executive Committee (NEC) of the Ruling Peoples Democratic Party, PDP, of which serving President Goodluck Jonathan is leader, as of right.

In all these however, Jonathan is not known to have voiced interest in contesting the 2011 national elections on the PDP platform or on any other party’s for that matter. In fact, early last month, he ordered the arrest of some over-zealous supporters, who by themselves, and without his consent posted giant-size posters at strategic places in Abuja, and which urged Jonathan to contest the 2011 presidential elections.

If anything, Jonathan’s known public comments on whether or not he would play a key role in 2011 came on the heels of his historic visit to Washington, seat of the American political power, in his days as Acting President.

Then, Jonathan had told probing news hounds that he had three basic options: To pair-up with a sellable presidential candidate as vice; Return to Bayelsa after the end of the Yar’Adua/Jonathan joint ticket and eventual presidency; or contest the 2011 presidential elections as the Nigerian Constitution entitles him to do.

Not once has Jonathan been heard to say openly that he would wish to hang-on to power longer than 2011, as did Babangida and the many other Military Heads of State from the Northern part of Nigeria, who among themselves ruled Nigeria uptill Obasanjo’s brief emergence after the death of Murtala and in 1999 re-appearing as an obvious Northern choice, apparently as compensation for his role in installing former President Shehu Shagari, instead of his kinsman Chief Obafemi Awolowo.

Former Ogun State Governor, Aremu Segun Osoba alluded to that fact last Friday during the executive session of the just concluded All Nigerian Editors’ Conference (ANEC) convoked by the Nigerian Guild of Editors in Port Harcourt, when while advising Rivers Governor Chibuike Amaechi, of the need to be discrete with official documents, Aremu Osoba shocked the conference with the information of how Obasanjo sought clearance from NPN candidate Shagari, on the choice of Supreme Court Justices to hear the election petition brought against Shagari’s 1979 Presidential victory by Awolowo. Twenty years later in 1999, the outcome of the presidential elections showed Obasanjo a little more of a Northern candidate, than a southern, without a political home base.

Even so, in 2003, Obasanjo was not given automatic re-election ticket, even in the face of the now contentious gentleman’s agreement of eight-year rotation between the North and South. Instead, as is required democratically, several others, including ambitious Northern elements contested the party primaries before the incumbent won re-election. Those who contested against Obasanjo did so because it was their constitutional right, so to do.

But today, Jonathan is being blackmailed with a rotational arrangement which had never, did not and probably would never have taken into account, the many fears of the Niger Delta, against which the Wilinks Commission warned long before independence in 1960.

Were the PDP rotation allowed to hold water, this would surely be the scenario. South-West, eight years 1999-2007, North-West, 2007-2015; South-East, 2015-2023, North-East, 2023-2031, South-South-2031-2039 and North-Central 2039-2047, a period of 48 years. The implication will be that in addition to the nearly 50 years of denial of political space to aspire to the highest political office in the land, the South-South geo-political zone would have waited 82 long years, but for the intervention of the Supreme Being known to the South-South as Ayiba, Tamuno, Chi, Abasi, Kiniyanabo Bari and Chinbo Boroma, among others. Strangely, it was that same God that unilaterally reduced Jonathan’s three known pre-president options for 2011, to only two, thus, erasing completely, the likelihood of he pairing-up with any ‘mega’ Northern candidate as running-mate, an arrangement which top politicians like Babangida, Atiku and Ciroma would have treasured and yet seek  second term as of constitutional right.

But I have a worry. The Nigerian Constitution clearly states that oil bearing states should be granted derivation of not more than 50 per cent.  This clearly means that 50 per cent derivation to the Niger Delta would still have been constitutional. But regaling in the euphoria of being a super majority, the Hausa/Fulani flock which predominantly people the North, along with other majority tribes considered only 13 percent after much sweat.

Their excuse, has well been that such huge allocation would ground other less-productive states of the federation and thus impracticable.  But today, the maximum of two terms of eight years is being pursued religiously as if oblivious of the fact that such would also ground many states desirous of a political  space, especially that of the South-South, with Jonathan merely as a vessel.

My Agony is that President Jonathan has yet to signify any intention of contesting in 2011, even if neither the PDP’s phoney rotational agreement nor the Nigerian Constitution forbids him to, but the polity is already awash with unpopular protests grounded in ethno-religious permutations.

These should not deter Jonathan because everything, from Yar’Adua’s protracted ill-health to Jonathan’s ascendancy to executive power as President, is like the peace of God which passeth all understanding, and clearly reveals forces far greater than Jonathan, the North, South and indeed Nigeria. That is why he should not allow mortal political book makers to distract him, from doing the work, which providence has imposed on him in these trying times of Nigeria’s existence.

Instead, Jonathan must seek to deliver on his inaugural promises within the short time at his disposal, particularly, those of improved, electric power supply, religious implementation of the post-amnesty package, the Niger Delta question and electoral reforms.  All others including the Presidency in 2011 will follow, if the same Supreme Being, the decider of all political conflicts, wills it so.

This is indeed not Jonathan’s fight, but that of all-well-meaning Nigerians who, have for far too long waited patiently for divine intervention in the lives of men, Nigerians and Nigeria in particular.

With that, no amount of unity in misfortune as the reported gang-up of strange political big-wigs seems, can change the face of providence which appears to be beckoning on Jonathan, under-estimated from day one and never seen coming this far, to stand up and address our fluctuating fortunes as a rich nation with very poor people.