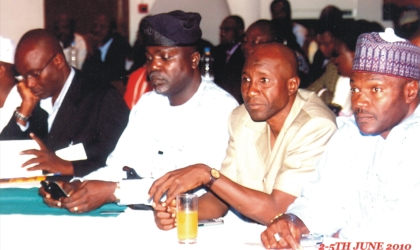 A lobby group, the Peoples Democratic Party (PDP) Reform Forum, has submitted a proposal to the party’s National Working Committee for the amendment of the PDP constitution.

Submitting the proposal in Abuja on Saturday, Dr Abiye Sekibo, the chairman of the group’s Sub-Committee on Party Constitution Amendment, said the goal was to facilitate internal democracy in the party.

“We are trying to propose motions that will democratise the party’s primaries and involve the entire membership of the party in the process of deciding who flies the party’s flag,” Sekibo said.

He said the proposed amendment had recommended the democratisation of the party’s convention in states and local government areas.

“It also recommends a democratisation of congress for election of national, state, local government and ward offices of the party,” he added.

Sekibo said the key principle of the process was aimed at raising the sizes of conventions and congresses.

“The more the number of delegates the better the democratic quality of flag-bearers that shall emerge.

“The recommended number will increase the sizes of convention and congress to accommodate more elected delegates,” he said.

The Tide’s source reports that the forum also recommended a ratio of 20-25 per cent of special delegates to 75-80 per cent of elected delegates with a view to enhancing grass-roots participation in the party’s electoral process.

Sekibo noted that the submission was based on the findings of the report of the Dr Alex Ekwueme-led committee that the party had strayed from its original principles, values and ideas.

He added that the forum also looked into the composition of various organs of the party with a view to bringing on board experienced people who could make them more functional.

Receiving the proposal, Alhaji Abubakar Baraje, the PDP National Secretary, said it was a welcome development, as it would move the party forward.

Meanwhile, former FCT Minister, Nasir el-Rufai yesterday urged the National Executive Committee (NEC) of the PDP to “objectively look at the proposed recommendations for amendments in the party”.

The PDP officially received the recommendations from the Reform Forum for constitutional and administrative amendments last Saturday.

Answering questions from journalists in Abuja, el-Rufai said the proposed amendments were important to move the party forward and further entrench internal democracy in the party.

He expressed confidence in the ability of the NEC as the supreme organ of the party to implement the reforms.

“Things have to change, if they don’t change, there will be problems within the party,” he said.

El-Rufai added that the areas of reforms had been itemised for the purpose of returning PDP to the original ideals of its founding fathers.

Some of the issues raised by the reform forum were that Article 10 (a) of the party’s constitution be amended and that the membership register be computerised to ensure control and avoid fraud.

It also proposed an annual membership subscription fee of N1,200 per member.

It estimated that if there were between four and six million members nationwide, the sum of N4 million to N6 billion could be raised annually, thus assuring independent funding for the party.

The forum frowned at the process where governors elected on its platform decided those to be elected into public offices, stating that it was a clear departure from the direct primaries of the party in 1998.