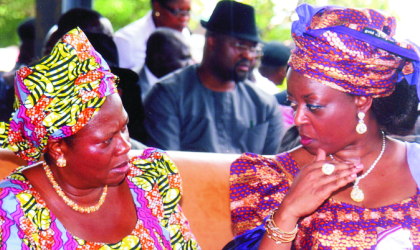 Minister of Petroleum, Mrs Diezani Allison-Madueke (right) conferring with the Minister for Information and Communications, Prof Dora Akunyili at the 26th Convocation ceremonies of the University of Port Harcourt, Saturday. Photo: Chris Monyanaga

Governors of the South-South zone have thrown their weight behind president Goodluck Jonathan to ensure his success in office.

Chairman of the South-South Governors Forum, Liyel Imoke of Cross River State disclosed this to newsmen at the Port Harcourt International Airport, recently.

Governor Imoke who expressed joy that for the first time a son of the South-South region has become the  President of this country, observed that the president’s first offcial visit to Rivers State signposts a brighter future for the region.

According to him, the visit speaks volume for Nigerians and in particular,  a big boost to efforts at addressing the yearnings and expectations of the Niger Delta people.

The visit, he added, is an indication of plans of fulfil our hopes for the good things that ‘we have been expecting from the federal government over the years and we hope that all will come to pass now, that Jonathan has come to stay as the president of this country”.

Imoke called on the people of the South-South to support the president as he pilots the affairs of the nation, and aurged that as a  citizen of Nigeria, Jonathan has the right to contest the 2011 presidential elections, considering his charisma and qualification to rule the country and urged the PDP to remain unshaken in presenting him as its candidate for 2011 polls.

Harping on the need for the new president to address the nation’s lingering power problem, Eze Robinson declared: whatever would make Nigerians to have constant power would leave his name on gold”.

On his part, Eze Frank Eke, said the emergence of Jonathan was ordained by God as it would have been difficult for the Niger Delta to have gotten it ordinarily , considering the politics at the national level.

Now that power has come to the region, Eze Frank Eke observed the new president need not hesitate in enacting good polices considering the short period of his tenure.

He tasked President Jonathan to concentrate on improving the nation’s deficient communication system and also tackle road construction across the country.

On whether Dr Jonathan should run for the 2011 elections, the Ikwerre traditional ruler said he believes the president should make good the opportunity at his disposal as a politician by doing what is expedient for him.