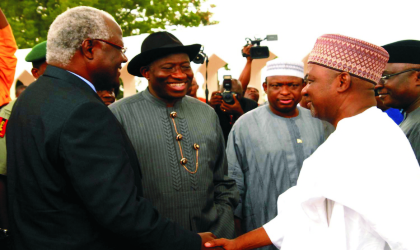 History was again made yesterday  in the National Assembly as President Goodluck Jonathan’s Nominee for Vice President, Alhaji Namadi Sambo was  ‘approved  and confirmed’ by both arms of the  National Assembly.

In accordance with section 146 subsection 3 of the 1999 constitution ,his confirmation by the Senate and the House of Representatives now gives President Jonathan formal approval to inaugurate the former Governor of Kaduna state as Vice President. This is also recorded as the first time in the history of Nigeria.

The Senate also invoked section 40 (2) of its standing rules to go ahead with the confirmation   even  in the absence of the nominee for screening .

Leading the debate for the confirmation of the Presidents nominee, Deputy Senate President , Ike Ekweremmadu   told the Upper Chamber the ‘assignment was a very important one and extolled the virtues of the former governor of Kaduna state.

Ekweremadu said that Alhaji Sambo has the calm temperament and the desired wealth of experience to perform the task of his new post and urged his colleagues to support the president’s nomination.

President of the Senate, David Mark in his ruling said the Yea had the day, in their unanimous vote in favour of the norminee and congratulated Alhaji Sambo for scaling the senate screening. David Mark, however, reminded him that althought the Legislature enjoys its independence its has worked harmoniously with the Executive to protect the constitution of the Federal Republic of Nigeria, while bringing democracy dividends to the citizenry.

Briefing Journalists later,  Chairman, Senate Committee on Information , Senator Ayogu Eze,  said the Senate was unanimous as shown by the voice vote on the decision for the approval on the V. P nominee.

Responding to questions on why the Senate was yet to swear-in Mr Alphosus Igbeke as the Senator-elect for Anambra North Senatorial District, Senator Eze declared that neither the Senate nor the Leadership has any special interest on who represents the district in the Senate but was waiting cautiously for the judiciary to make a  final committing statement.

According to him,  the Senate is only waiting for them to ‘finish their legal gymnastics’.

Meanwhile, the House of Representatives, yesterday approved the nomination of Alhaji Namadi Sambo as Vice-President of the Federal Republic of Nigeria.

This was sequel to a motion by the House Leader, Rep Tunde Akogun (PDP-Edo), which was unanimously upheld by members when put to vote by Speaker Dimeji Bankole.

Earlier, Akogun had said that the task of approving the nomination was a constitutional role which the federal lawmakers must perform.

The approval came after Bankole had read a letter from President Goodluck Jonathan requesting the House to confirm the nomination of Sambo, who had been the Governor of Kaduna State.

The speaker announced that the matter would be put to vote without debate by the representatives, a suggestion most of them opposed but accepted after a rowdy session.

Rep Ubale Kiru (ANPP-Kano), who raised Order 8 Rule (2) (2) of the House Rules, urged the House to postpone the approval of the Vice-President to another legislative day, a request overruled by Bankole.

Rep Ali Ndume (ANPP-Borno), the Minority Leader, in his contribution, said the nominee met the criteria set by Section 133 of the 1999 Constitution, adding that he had no objection to Sambo’s nomination.

Eight new bills were also introduced on the floor of the House.

The House was, however, silent on the issue of the proposed two-party system on which it had postponed voting on May 13 after a stormy session.