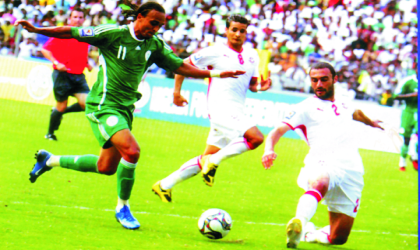 Joseph Yobo has warned that the Super Eagles will have to play as a team in order to get a result against Lionel Messi and his Argentina team.

Nigeria open their campaign on June 12 against Argentina and Yobo is wary of the devastating effect the current FIFA World Player of the Year has had all season.

“Messi is unbelievable and just seems to get better and better,” Yobo stated. “Every time he’s on the ball you know something is going to happen. He deserves to be the world’s best.

“Its going to be very, very difficult, I think we have to do things as a team rather than as individuals. The way he plays he finds his freedom on the pitch which makes him exceptional but if we defend as a team and keep our position and keep our concentration for 90 minutes, hopefully we can do it.”

The Everton defender has been involved in the Nigeria international set up since for a decade, and says the pressure is something his Premier League colleagues do not understand.

“They don’t understand what we go through in Nigeria – you have an ultimatum of what is expected. For the last African Nations Cup they said if we don’t get to the final or semi-final then we are no good.

“There is always expectation because of what players in the past have done and we just have to try to better that or match it and it is very, very difficult. It’s not every player that can stand up to that.

“Playing for Nigeria, a nation of over 150 million, football is like a culture so when you do well you’re a big hero but when you don’t do well it’s like you don’t want to go back home. We’ve just got to throw in everything we have got to make sure we make Nigeria proud, and not just Nigeria, Africa as a whole.”

Not too many are giving the six African representatives a chance to win the World Cup, with Yobo’s teammate Steven Pienaar saying an African country will not win the World Cup, but the big Nigerian insists that it is a unique opportunity for Africa to rule the world.

“The World Cup is coming to Africa and it is very special. In South Africa we have loads of Nigerians staying there – it’s like our second home.

“It’s very special in Africa because it is bringing out Africa as a continent – especially South Africa the host country – and we’re playing close to home and are very excited about that.

“Its a great opportunity and we want to make sure this time – we don’t know when an African country is next going to be host — we prove a point and we show how good African teams are, especially Nigeria.

“Now we are playing close to our fans, close to our home and family and everyone is looking forward to it. There is great expectation and we believe this is the right time if we want to show this area can do something.”

“We want to make sure this time we show how good African teams are – especially Nigeria.”

Yobo is already in Abuja ahead of a Send Forth Dinner with Nigerian President Goodluck Jonathan.

Meanwhile, Nigeria’s captain Nwankwo Kanu has assured Nigerians that the Eagles will not go into the World Cup, especially the opening group match against Argentina to pick balls, but to play all the way to an appreciable level Africa would be proud of.

Speaking in interview programme, Extra time, the Eagles’skipper said, “We only have to have the belief and be positive. We don’t go down to anybody because we have to show the world we’re good especially on a big stage like the World Cup.

“In Nigeria, we can die because of football. Four years ago, we did not make it to the World Cup, but luckily we will be in South Africa.

The Portsmouth forward said that the Eagles want to come out with something everybody could be proud of.

The Nigeria Football Association has already given new coach, Lars Lagerback, a semi-final target but Kanu who is in the twilight of his career said the Eagles can play all the way and win the tournament.

“Nigeria will be one of the strongest African teams at the World Cup. On a good day, we can beat any team, be it Brazil or Argentina.

“There will be surprises at this World Cup and it won’t be advisable for anybody to underrate any team,” said Kanu.

“Argentina are a big football country, but all the same, we won’t go into this match just to go and pick balls. It will be an interesting game and the result of this game could determine this group.

“It’s important to win our first game and from there, we can move forward.”

Nigeria will move into camp in England on Friday after a Presidential reception in Abuja on Thursday.