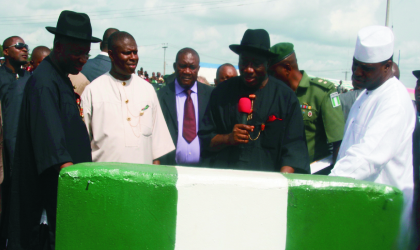 Adekunle, who is the U.S. Coordinator of the Coalition, announced this in Abuja on Sunday.

He said members of the coalition had already written to President Jonathan that “the overwhelming mood of the nation points to a massive support for his bid to retain the Presidential mandate through the presidential polls next year.”

He,  called on President Jonathan to ”answer the call of Nigerians who desire that he completes the good work he and the late President Umaru Yar’Adua started.

“A reading of the mood of the nation indicates that majority of Nigerians are ready to throw their weight behind him if he accedes to their clarion call to lead them through these difficult and challenging times.

“A good opportunity to answer this call comes next year when the country holds the presidential elections,” he said.

He stated that Nigerians elected him alongside President Yar’Adua in 2007 and are ready to give him the presidential mandate in view of his sterling qualities.

“The call is loud and clear that he should in national interest contest the presidential election in 2011.

“He has proven to possess the qualities that Nigerians are looking for in a leader to take the country out of the woods as Nigeria marks 50 years of nationhood.

“This is a patriotic call which we urge him to hearken to as we pledge our readiness to mobilise Nigerians at this historic moment in our march to national development and greatness,” he said.

While lamenting the unfortunate death of Yar’Adua, the Coordinator expressed satisfaction that Jonathan worked with him and was loyal, effective and hard-working enough to take over from where the late President stopped.

“It is well known that he ascended the Presidency of Nigeria in unprecedented and very challenging circumstances thrown up by the unfortunate death of President Yar’Adua.

“We are not happy that our President died and was unable to complete his tenure for which he was overwhelmingly elected in 2007, but we find it divinely destined that he had by his side a capable hand.

“Nigerians have observed with keen interest his avowed commitment to enshrine credible democratic processes through genuine electoral reforms that have eluded the country,” he said.

He described the President’s recent visit to the U.S. as a positive development which had helped in boosting the image of Nigeria.

“The accolades you received during that visit and the kind and rare positive words and comments from the American leadership are quite noteworthy.

“Equally notable is the enormous goodwill showered on Nigeria through his presence in the United States and the faith in his leadership expressed at every juncture of his sojourn in America,” he further noted.