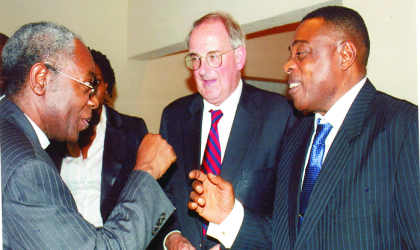 The Ijaw National Congress (INC), umbrella socio-cultural organisation of Nigeria’s fourth largest ethnic nationality has listed key demands of both the Niger Delta region and indeed the entire nation that the new Nigerian President, Goodluck Jonathan may address within his short period in office.

President of the INC, Dr Atuboyedia Obianime who disclosed this in an exclusive interview with The Tide in Port Harcourt, yesterday, urged Jonathan to see himself first and foremost as a Nigerian leader, patriot and president, who must strive at all times to rise above board and be counted as a statesman.

The INC cautioned Jonathan  against the tendency to demean the presidency by misconstruing it as a ‘Niger Delta’ turn, which is not, even if he is an Ijaw man and a Niger Deltan.

Dr Obianime urged the president to resist  likely temptations from those who may wish to box him in a corner, by insisting, ‘this is our turn’, arguing that nearly, everybody, and all progressive forces prayed for and worked towards filling the  vacuum created by Yar’Adua’s protracted ill-health.

Instead, the INC insisted, Jonathan must maintain and stabilise the realm, by seeing the stability of the Nigerian state as a major priority.

That, the INC said, Jonathan can achieve by striving to bring to fruition the enviable vision, mission and real legacies of his fallen principal, the servant-leader, late President Umaru Musa Yar’Adua.

To achieved that objective, the INC advised President Jonathan to take a more critical look at Yar’Adua’s 7-Point Agenda and reduce them to two or three point agenda that are realisable and achievable taking into cognisance the  finances and time available.

It is only by that approach, the INC said, that Jonathan could immortalise Yar’Adua, give Nigerians hope for a brighter future and bequeath a legacy with a strong impact that aptly highlights the much needed difference.

According to the INC president, the demands of Ijaws and indeed the Niger Delta region have not changed because the fundamental issues that formed the nucleus of the Niger Delta struggle have not been properly addressed.

He therefore urged the president to run an open, transparent and vibrant presidency which cardinal principles should be hinged on the rule of Law, equity, fairness and justice.

While urging the presidency to attend to the demands of the Ijaw people and indeed all Niger Deltans with the urgency and vibrancy the issues demand, the INC repeated its calls for the convocation of a national conference of all ethnic nationalities to ventilate their views, hopes, fears and aspirations, insisting  that only such a forum would enable the Nigerian nation truly appreciate the wide and diverse needs and bottled-up frustrations of various interests that in a near frequent manner tend to threaten the oneness, peace and stability of the union.

The INC commiserated with the Nigerian government, fellow Nigerians and especially the family on the departure of our past servant-leader Umaru Musa Yar’Adua and urged President Jonathan to continue in the Nationalistic footsteps of his former principal.