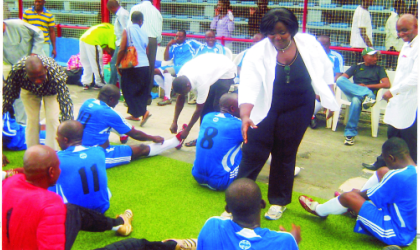 Rivers State Commissioner for Information and Communications , Mrs Ibim Semenatari congratulating players of the Ministry’s team, The Mighty Sparrows after their first round victory over Ministry of Finance

Nigeria Technical Adviser Lars Lagerback has named his 30-man provisional squad for the World Cup, including two players from the domestic league.

Hull City’s Seyi Olofinjana has paid the price of not playing for Hull as he has been left out of the squad, with Monaco midfielder Haruna Lukman reaping the benefits of his playing time with the Principality oufit.

Portsmouth forward john Utaka and his brother Peter are also included in the squad, as are two players in a race against time to be fit for the World Cup, John Mikel Obi and Ikechukwu Uche.

The two players from the domestic league are Bayelsa United goalkeeper Bassey Akpan, and Lobi Stars right back Terna Suswan.

The squad is expected to be cut down to 23 players on June 1.

Nigeria are drawn in Group B of the world Cup with Argentina, Greece and South Korea

They admitted that there was little departure from the players former team coach Shaibu Amodu in prosecuting his campaign but said what the team required for the World Cup was a deeper technical imput.

Former international, Patrick Ekeji said the national coach was not operating alone as the Swede had told the panel that interviewed him for the job how he would pick his players.

Ekeji said the quality of a good coach was his ability to turn the talents available to him to a winning side.

“I am satisfied with what he has done. All he has to do is to adopt a mental and psychological approach to have a winning team.

“They are talented players and are not bad individually. They need to have a winning spirit,’’ said the former defender, who is the National Sports

Former Super Eagles defender, Taribo West, also okayed the list, saying that  what was needed now was to have an effective and well coordinated preparation.

West recalled that the 1994 squad prepared very well but lacked experience, adding that the level of preparations began dropping after Nigeria’s first appearance in USA ’94.

West, now a pastor, called for improved preparation for the first World Cup in Africa.

NFF Technical Committee Chairman, Taiwo Ogunjobi, said the federation had taken care of the team’s welfare to ensure they excelled in South Africa.