Former Minister of State, Petroleum  and ministerial nominee, Mr Henry Odein Ajumogobia (SAN) has  identified  deregulation of the down stream petroleum sector as the leeway to solving problems of scarcity of petroleum products  while saving the nation over N687 billion  spent as oil subsidy annually.

Making   presentations at the ongoing screening session of ministerial nominees by  the Senate, the former minister of  State for Petroleum, Odein Ajumogobia and  Mrs   Deziani Allison Madueke (fmr. Minister of Solid Minerals)   opined that deregulation of the downstream  would bring about  private participation in the oil refining business, cut down the cost of refining abroad  while boosting employment for Nigerian youths .

While responding to questions on  the low refining capacity of the nations refineries, Nigeria’s low control of the oil sector and the Petroleum Industry Bill, Mr.  Ajumogobia , said his tenure in the last cabinet met  the challenge of  increasing the linkage between the oil industry and employment generation.

To achieve this , he noted requires a high increase in investments in the oil sector, which in turn requires making the sector attractive to investors.

According to Mr. Ajumogobia, poor funding of the sector has also been a great challenge to the ministry and to properly reposition the industry, the issue of deregulation of the down stream sector cannot be alienated.

His words “ there is the need  for deregulation of the down stream for the full growth of the industry. Nigeria has no total control of its oil and gas sector, one of the challenges of the industry was  security of the pipelines.

“Last refinery was built in 1989, unless we deregulate we will not attract those who will build refineries. In 2009,  N687 billion was spent as subsidy. Government does not have the funds to build refineries. It is in the hands of the private sector and we must encourage them. Exporting crude for refining is like exporting job opportunities”

The former minister said Nigeria has great prospects in the oil and gas sector , especially the gas sector if well funded. He also disclosed that the Gas Master plan already drawn by the ministry during his last tenure was capable of taking the sector to the promised land.

The Senior Advocate of Nigeria, who was once  Attorney General, and Commissioner for Justice in  Rivers state said from experience , he was comfortable in the petroleum ministry and believes his grip of the industry  can move the sector to greater heights.

Mrs Deziani Allison- Madueke  , a nominee of Bayelsa state in her own presentations intimated the Senate with her achievements  in the  Ministry of Power  and Steel while she was in the ministry and also her findings in the Solid minerals sector  after her redeployment.

Mrs Deziani told the Senate how she impacted on the fortunes of the mines industry where she developed strategic coal plaster, started coal to power initiatives  with first pilot project in Kogi state.

The Ministry under her “restructured six blocs bitumen structure in the country , she noted had started biddiing process for blocs.

According to Mrs Madueke , she revalidated  mineral mining titles, (over 2000titles,revalidated , over1300newly approved titles). About N222 million was given out to small scale miners capable of creating 70 million jobs.

“We attracted world marketers and buyers for the country’s gem stones. And direct foreign investment in the sector from which Nigeria expects to get between $6 to $7 billion revenue annually”, she added.

The senate has so far screened 26 nominees comprising both fresh and re-appointed nominees.

Those screened yesterday were former ministers in the last cabinet, Mrs Fidelia Njeze, Mr . Adetokunbo Kayode (SAN) and the immediate past Minister of Information, Prof. Dora Akunyili whose screening raised so much uproar following her position  and declaration on the state of the nation   arising from the long absence of President Umaru Musa Yaradua from the seat of power.

Former Minister, Senator Sanusi Daggash , whose screening was expected to be another stormy one over his war of words with Senators years back  following the cut on his ministry’s budgetary allocation  for 2008 , surprisingly passed with the normal “bow and go” privilege but not without strong apologetic words and appeasing statements.

In his presentation ,  Senator Daggash disclosed that he had met almost all the senators one, on one to explain some issues adding that during his last tenure, he “stood up for things ,I did not fully understand”

The screening continues today as the Senate is expected to screen 12 more nominees and confirm all of the successful ones before the upper chambers proceeds on Easter recess tomorrow.

Meanwhile, the Senate yesterday continued the screening of ministerial nominees with all nine former ministers screened for re-appointment.

At the resumed session of the senate yesterday, nine additional former ministers re-nominated except  Dr Shamsudeen Usman were screened.

Unlike on Monday, when emotions rose in the senate during the screening of Prof. Akunyili and  Kayode, yesterday’s session was calm. 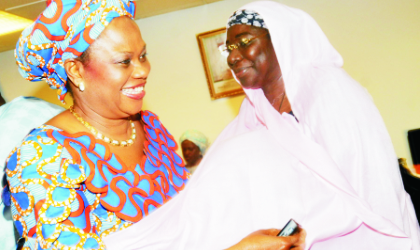