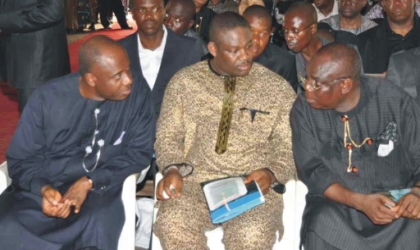 The Barack Obama administration in the United States, last Friday said it was pleased that Nigeria’s Acting President, Goodluck Jonathan has consolidated his grip on power, easing fears on a power struggle that has fueled instability in the oil rich West African state.

“I think he’s done a very good job of consolidating his authority and reassuring all segments of the community,” Assistant Secretary of States,  Jonnie Carson said in an interview with Reuters.

The United States also said it supports the rotation principle of the ruling party, Peoples Democratic Party (PDP) where power is rotated periodically between the predominantly Muslim North and the Christian south, since it promotes stability in the country.

“We hope that the political balance which has given Nigeria its political stability will prevail, Carson added.

He said Washington was hopeful and encouraged by Jonathan’s bold commitments in fighting corruption, pushing for electoral reforms and lasting peace in the often fragile but oil rich Niger Delta region.

The absence of Nigerian President, Umaru Yar’Adua, who has not been seen in public since November last year due to acute kidney and heart ailments had set the stage for a power struggle between Nigerian political elites because of Yar’Adua’s refusal to formally transfer power to Jonathan, his vice president.

After weeks of tension amid a flurry of law suits challenging the constitutionality of Yar’Adua’s refusal to transfer power coupled by fear of a military coup d’etat, the National Assembly backed by powerful and influential state governors elevated Jonathan to Acting President in February.

But Yar’Adua’s presumed commando-like return from his Saudi Arabian hospital orchestrated by members of his kitchen cabinet led by his wife, Turai, suddenly fueled another round of tension, earning the cabal series of condemnations from both Nigerians and the international community, who engaged subtle diplomatic threats to force them to recognize Jonathan as Acting President.

Having gotten the cabal to back down and knowing that Yar’Adua may not return to power, Jonathan moved to gradually ease their influence on power by sacking the National Security Adviser, Abdullahi Muktar, who is seen as a member of the cabal and replacing him with Aliyu Gusau, an influential former army intelligence officer.

On Wednesday, he sacked the entire cabinet made up mainly of Yar’Adua’s appointees to cement his authority and is set to nominate new appointees early next week and it is doubtful that Yar’Adua’s loyalists would return.

“We believe those in power in senior positions have clearly opted to support a stable democracy during this period of uncertainty. “

“We don’t know whether he (Yar’Adua) will come back. But I think the country is in fact moving on,” Carson emphasized.

Jonathan has promised to speed up electoral reforms before the 2011 general elections where he is unlikely to run because the ruling party has emphasized that it wants its president to emerge from the north for the next for years based on an earlier power rotation deal.