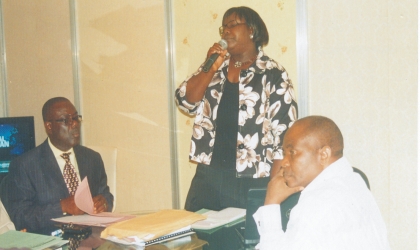 Following the bitter outcry of Lagosians, especially the call on Governor Babatunde Fashola, by Archbishop Olubunmi Okojie to intervene and stop the rising number of nude clubs in the state, where young ladies dance stark naked and practice live sex on stage to entertain their guests, the state government has finally decided to clamp down on four of the most popular of the clubs in the Opebi-Allen axis of Ikeja.

The Tide gathered that before the raid on these clubs were carried out, some taskforce officials visited the clubs disguised as patrons. They keenly monitored the nefarious activity that goes on in these clubs for a whole night before raiding them early the following day.

The Chairman of Lagos State Environmental Task Force, Mr. Bayo Sulaiman, told newsman that the state government raided and shut the clubs because of the obscene things they do there.

Sulaiman added that most of these clubs had lately become the hideouts of criminals and other unwholesome persons.

He stressed that the strip night clubs were unregistered and therefore the government was finding it difficult to regulate them.

The Tide was reliably informed that the strip dancers were taken by surprise as they never expected the Task Force to visit them in the night.

One of the nude dancers arrested, a 24 year old Ghanaian named Traore Anida, said she started the job about a month ago because she was in dire need of funds to go back to her country.

According to her, she was brought to Nigeria by a woman who is based in Benin Republic. “I needed money to go back to Ghana and there is no other work that I can do to get the money fast, hence I joined the job” she said.

The Archbishop of Lagos State had earlier in a statement called on the state Governor, Mr. Babatunde Fashola, SAN, to shut the increasing number of nude clubs in the state.

Cardinal Anthony Okojie through the State Social Communications Director, Reverend Gabriel Osu condemned the act of dancing naked in clubs by young girls. “Evil has taken over in Lagos State. The way things are going, when girls between the ages of 15 and 25 dance nude and throw caution to the wind with boys and men watching them, then they are sending a wrong signal to the society. It portends danger. We are sitting on a loaded gun” said Okojie in the statement.

Recently, The Tide stumbled over a meeting of the Managing Director of Virgins Restaurant, Mrs. Hellen Lowe was having with two young men whose mission was to conclude plans on the possibility of starting a makeshift strip night club in the restaurant located in Ogunlana Drive, Surulere. The woman purportedly refused for fear of her business being shut down by the authorities concerned.

She spoke with The Tide after the meeting and said, “They were here to discuss how to bring strip dancers to come and dance naked every Wednesday night but I refused. Though the business will increase the number of my customers but I don’t want police wahala” She said laughing.

However, the Task Force Chairman had called on the general public to inform them of any location such night clubs exist within the state for action.