The Supreme Court of Nigeria, sitting in Abuja, yesterday dismissed a fresh suit by Sir Celestine Omehia which sought  to challenge the constitutionality of the apex court’s judgement of Oct 25, 2007 which pronounced Rt Hon Chibuike Rotimi Amaechi as governor of Rivers State.

In this suit, two years after the first , Sir Omehia had asked the court to reverse itself in the judgement which removed him from the state government house as governor, after nearly five months, on grounds that the verdict contradicted relevant portions of the 1999 Nigerian Constitution.

But in a unanimous decision, the seven Supreme Court Justices, led by Justice Alloysius Kastina described the suit as frivolous and an act of judicial rascality, and accordingly dismissed the case.

Justice Kastina in his lead judgement held that it was impossible for the apex court to reverse itself on the matter and instead restated its position that Governor Amaechi remains the legitimate governor of the state.

And in what legal pundits view as a touch of finality, the Supreme Court declared, “only God can reverse the Oct 25, 2007 verdict”.

It would be recalled that Governor Amaechi had early in 2007, filed a suit challenging his substitution with Sir Omehia in the April 14, elections of that year, though  it was the former that won the December 2006 primaries of the Peoples Democratic Party (PDP) in the state.

That case lingered from the High Court to Appeal and up to the Supreme Court where the apex court in October 25, 2007 delivered what became the historic judgement that made Rotimi Amaechi governor of the state and was subsequently sworn-in as such.

Not satisfied, Omehia headed to the same court, two years after to request the reversal, arguing among other things that by that judgement, the Supreme Court unwittingly embarked on judicial legislation or amendment of the 1999 Constitution.

Arguing that reversal of the judgement alone would restore the dignity of the Supreme Court, Omehia attorneys held that the enthronement of one who did not contest election as governor  amounts to enactment of a new law which was at variance with the spirit of the law.

But Lateef Fagbemi (SAN) representing Gov Amaechi urged the court to dismiss the suit on grounds that it amounted to abuse of court process, judicial rascality and indeed frivolous in all material particular.

In its final judgement, the seven-man Supreme Justices threw out Omehia’s suit describing as frivolous and judicially rascality. 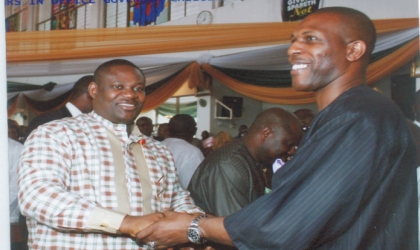 The Supreme Court of Nigeria, sitting in Abuja, yesterday dismissed a fresh suit by Sir Celestine Omehia which sought to challenge the constitutionality of the apex court’s judgement of Oct 25, 2007 which pronounced Rt Hon Chibuike Rotimi Amaechi as governor of Rivers State.