Six factional leaders of the Anambra State Peoples Democratic Party (PDP) have been invited by the state police command for questioning in connection with the kidnapping of the father of the former Central Bank Governor, Pa Simeon Soludo.

This was made known to newsmen last Friday by police officers handling the investigation on the case.

It was also gathered that two of the factional leaders had run out of the country following their invitation to appear before the police for interrogation.

However, the godfather of one of the factions, from where the PDP National Working Committee (NWC) appointed the executives of the party in the state, Chief Chris Uba, said he had not seen any invitation from the police.

When contacted, the Police Public Relations Officer (PPRO), Mr. Emmanuel Ojukwu, said that the factional leaders had been invited, but the police officers handling the interrogation had not given his office the result of their investigation but he could not say whether some of those invited were on the run.

The Anambra State Commissioner of Police, Mr. Philemon Lema, insisted that the kidnap seemed to have been sponsored by politicians and ordered that all the factional leaders of the state PDP who had been protesting Professor Soludo’s PDP nomination be invited for questioning.

In a related development, the national leadership of the Peoples Democratic Party (PDP) has come under pressure to move against its Anambra State chieftain, Chief Chris Uba, who has declared his opposition to the emergence of Professor Chukwuma Soludo as the party’s candidate in the February 2010 gubernatorial elections but the leadership is apparently divided on the course of action.

Investigation revealed that party leaders, especially stakeholders from the South-East zone of the country, have expressed their concern at the attitude of Chief Uba, who, “as a member of the Board of Trustees (BOT), is expected to play a fatherly role instead of openly insisting on the reversal of the decision of the National Working Committee (NWC) of the party to nominate Professor Soludo.”

However, it was gathered that even though most of the members of the NWC are desirous of breaking his perceived stranglehold on the Anambra politics, they have not been able to agree on how to proceed with any disciplinary measures against him in view of his enormous contributions to the growth of the party in the state.

While some were said to have insisted on the leadership carrying out its threat to deal with any of its members that are still fomenting trouble as a result of the nomination of Professor Soludo, others wanted the matter to be allowed to lie low “because of the sensitive nature of the Anambra State politics.”

Some of the NWC members are also furious that Chief Uba went ahead with the recent anti-Soludo rally in Awka, the state capital. 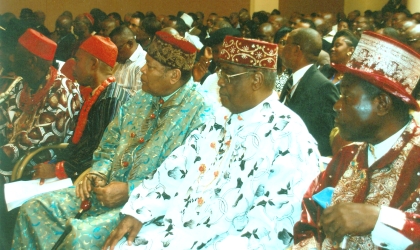 Cross section of traditional rulers during a meeting of stakeholders at Government House, Port Harcourt.