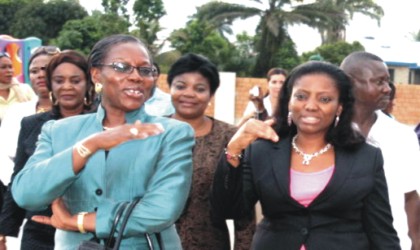 Nigeria’s Under-17 football team, the Golden Eaglets yesterday at the Bauchi Stadium showed glimpses of their potentials in the on-going FIFA U-17 World Cup, Nigeria 2009, with an impressive 2-1 victory over Argentina.

It was a result that secured the Eaglets the top position in group A and a slot in the quarter final stage of the championship.

The game, which was the final group fixture was crucial to Nigeria as any negative result would have seen the Eaglets, who are the defending champions eliminated from the contest, especially, after the other match played simultaneously saw Germany run out 3-1 winners over Honduras to notch up four points, with positive goal difference.

Nigeria made a worse possible start to the momentous match when barely two minutes into the game, Argentina striker, Orfano shot his side into the lead.

The astounding goal however, galvanised the Eaglets to positivity as they pushed forward and pulled themselves level three minutes later through Omoh Ojabu.

Argentina, who was already guaranteed qualification, courtesy of their two consecutive victories against Honduras and Germany continued to seize the initiative.

But the Golden Eaglets fought gamely to ensure that the first half ended on an even note, one goal apiece.

On resumption of the second half, the Coach John Obuh tutored Eaglets raised their game and began to threaten the Argentines consistently.

However, despite coming close on several occasions, the wastefulness that has become the lot of Nigerian strikers in recent times proved to be the bane of Eaglets.

On the 72nd minute, Kayode saw himself inside Argentina’s box only to be brought down to the disapproval of the referee.

The resultant penalty kick was converted by Sani Emmanuel to give Nigeria the desired winner.

With the victory, performance and advancement, the Eaglets succeeded in winning over most of the Bauchi fans and indeed, Nigerians, who cheered them whole heartedly, especially, in the second half.

Meanwhile private Primary and Secondary Schools around Abubakar Tafawa Balewa Stadium, Bauchi, venue of the match between Nigeria and Argentina in the ongoing world championship, were closed down, yesterday for security reasons.

Our correspondent gathered that the one day (Friday) closure was connected to security of the pupils. The match was billed to commence by 3.45pm Nigerian time.

According to a source in one of the affected schools, who preferred anonymity, the one day closure was for the security of the pupils.

Speaking on telephone with our correspondent the source stressed that criminals could cash in on the crowd around the stadium to abduct children returning from schools.

Bauchi State has a history of child theft. The implication is that the schools will lose several contact hours as long as the FIFA organised U-17 world championship lasts.